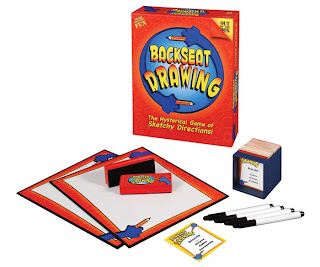 My family loves to play board games, and we own many different games. We try to have family game night at least once a week, and love to play games when we have extended family over.

So I jumped at the chance to review Backseat Drawing from Out of the Box. This game was very simple to learn, and fun to play. The age range given for the game is 12 and up, but my 10 year old son had no trouble with the game, and I think it could be easily played by younger children with a few simple rule modifications.

It comes with games cards, dry erase pens and two white board drawing pads. When you play, two teams race to identify drawings done by their own team members. But, in a cool twist, the person doing the drawing doesn’t know what they drawing, they are only following directions.

One team member serves as the Director and tells the Artist what to draw, while the other team members try to guess. This results in lots of laughter, lots of odd pictures and lots of erasing. Here is a toothbrush as drawn by my oldest following directions from her brother: 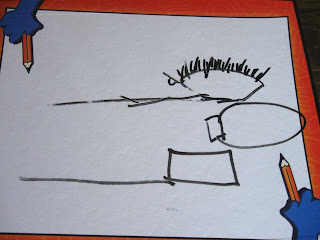 As you can see it sort of looks like a toothbrush, but it took more than one try at drawing it to get it there.

One of the things I enjoyed about this game is that it can be easily played by any number of people. We played with 5 people, but lots more could have joined in.

We will definitely be playing this the next time we have a group of friends over, since I think it would be even more hilarious with more people. Another good thing is that it is easy to control how long the games lasts.

If your group has a short attention span you can just play until one team gets 5 drawings right. Or you can keep going and play until one team has 10 right. The game is educational too, since it requires precise language, following directions and teamwork.

But most of all the game is fun, and resulted in lots of laughter at my house. Out of the Box makes lots of other great games too. Here is the stack of games from Out of the Box that was in our game cabinet 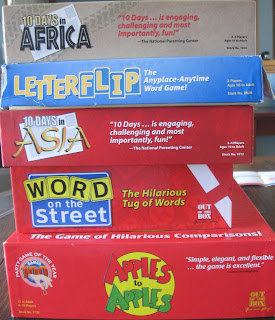 These are some of our favorite games, and one of the best things about them is that they are both fun and educational. The 10 Days in .. games are great for a small group of people, and are some of my children’s favorites to play on their own.

They can easily locate all the countries in Africa and Asia from playing these two games. Lately they have been putting the games together and playing their own variation that takes 20 days and requires hopping between the two continents.

Letter Flip and Word on the Street are both word games that help with spelling and logical thinking. My children actually enjoy spelling when there is a game involved. Apples to Apples I’m sure many of you are already familiar with, since this game is great at parties and popular with all ages.

Disclosure: I received a game for review purposes. I received no other compensation for this review, and all opinions are my own.