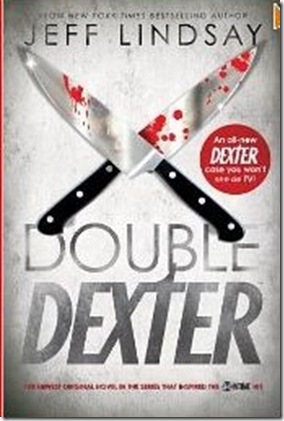 This book is the latest by Jeff Lindsay in the Dexter series, which has been popularized by the Showtime series.  As happens many times with books that are made into TV shows the book series and TV show diverge quite a bit.  Many of the   In this book a witness accidently sees Dexter chopping up a body.  The witness doesn’t respond by turning Dexter in, but by making his life miserable and stalking him. Dexter spends most of the book thinking his secret will be discovered at any time and looking over his shoulder.

Lindsay is a very funny writer.  There is an entire sequence in which Dexter takes his step son on a cub scout campout which is hilarious, especially the long dissertation on deadly creatures that can lurk in the wild.  The scenes with his step daughter Aster and her reaction to getting braces are also very funny.

The plot of the book doesn’t have a lot of suspense, because it is obvious to the reader who the stalker is long before Dexter figures it out.  Dexter also has lots of problems with his wife Rita, and again it is obvious to the reader what is bothering her.  So Dexter spends a lot of the book floundering around and doesn’t seem as smart in this book as he does in others.

Despite the fact the book isn’t as suspenseful as I expected I enjoyed reading it.  It was fun to see what happened and watch as Dexter realized that he was the one who was being targeted for a change.  It was an interesting switch from the other books in which he is mastermind who is manipulating everyone else, and I’d rate the book as 4 out of 5 stars.

Disclosure: I received a product for review, all opinions are my own.