Classical education is something that has always interested me, because the Great Books of Western Civilization underlay so much of our culture.  So I was happy to get the chance to review a classical curriculum from Roman Roads Media.  Roman Roads Media is a company dedicated to publishing Classical Curriculum for use in homeschools.  They have quite a variety of curriculum, and the one I was able to review is Old Western Culture: The Greeks.  This is a comprehensive, year long, integrated humanities curriculum, which covers literature, history, philosophy, and art by studying the great works of Ancient Greece.  I love this program, and it is absolutely my favorite of all the homeschool resources I have reviewed this year!

This program is designed for children in grades 8 and up.  This is a full-year long course which consists of four separate units, which are:

The course is available both as online streaming or as a series of DVDs.  I received the entire course online, and one unit on DVD so I could evaluate both.  I am going to talk mostly about the online version, and explain the differences between the two at the end.  The course is designed around a series of lectures from Wes Callihan, a well known classical educator who teaches online tutorials and has written extensively about the classics.  Each unit contains 12 lectures from Callahan, interspersed with various reading assignments, quizzes, exams, and papers.

Each unit starts out with a course guide in a pdf file which includes an introduction and schedules for the year.  A unit is designed to be completed over 9 weeks, but the course guide also has a schedule for completing a unit in 7 weeks. These schedules are nicely color coded based on the type of assignment, which makes them easy to implement.

The online course has an interface that guides you through each lesson and tells you what to do next.

The course generally has scheduled readings, followed by a lecture discussing the readings.  There are online multiple choice quizzes about the reading selections, and there are also online quizzes about each lecture. After you complete each part you mark it complete, at which time the quizzes are graded.

The online interface contains reminders about offline work, like writing a paper.  At the end of the unit there are two exams.  A student who scores less than 90% on the first exam is encouraged to review the unit and take the second one.

The course also includes a pdf of a student workbook, which includes the same questions as the online quizzes, although in short answer format, not multiple choice.  The workbook also includes extra discussion questions.  There are not specific topics given for the paper topic, but the course suggests using some of the discussion questions in the workbook as a basis for a paper.  There is also a short booklet called Guide to the Art, which has pictures and descriptions of  art related to each lesson.

How I Used The Greeks

I worked through this curriculum myself, rather than have my 15 year old son use it.  His summer camp schedule made it hard for him to spend enough time on the course.  I decided to do Unit 2, Drama and Lyric, mainly because I haven’t read Greek drama since I was in college, and I thought it would be interesting.  So I worked through the first eight lessons of Unit 2, which covers the following ten plays:

The lessons I didn’t get to cover some lyric poetry and two more plays, Fall of Troy and The Argonautica.  The curriculum says it will take 1-3 hours a day, and I spent about 6 hours a week on this, basically on the schedule to complete it in 9 weeks.  I would expect it would take a high school student like my son longer to complete this than I took, because as you can see it has an aggressive reading schedule.

Why I Liked The Greeks

The lectures from Wes Callihan were comprehensive and well thought out.  They focused mostly on the works read, and explained the background necessary to really understand these classic plays.  There was lots of information on Greek theater, and the history that underlies the plays. Many of the plays have a back story that Greeks would have known, but we would not necessarily know today.  So the information is essential for really understanding the action of the play.Â  Also the plays are read chronologically, and Callihan gives some interesting insight into how Greek theater changed and progressed over time.

The quizzes were relatively easy, and the online grading was convenient.  I liked that the questions included line numbers, so it was easy for me to refer back to the plays if I wasn’t sure of the answer.

Roman Roads includes pdf files with the curriculum that include all the texts read in free editions. Now these aren’t always the most recommended translations, but I love that the company makes these so easily accessible.  They also link to free audiobooks for some of the works.  It is a huge cost savings to not have to buy any of these works, or spend time tracking down the book from the library.  You can buy copies of the books from Roman Roads or another source, but you don’t have to.

This program is geared for 8th grade and up, and I think that is about right.  The video lectures aren’t flashy, but include artwork, pictures and timelines.  So while I think a younger child might find them not interesting enough, they are perfect for the age range.  They are similar to listening to a college lecture on a subject, and taking notes on the lectures could be a good exercise for a high school student, although it is not necessary for understanding the course.

I also spent some time looking through the other 3 Units of The Greeks, The Epics, The Histories and The Philosophers.  The Epics covers the Iliad and Odyssey, The Histories covers the historians Herodotus, Thucydides and Xenophon, and The Philosophers covers Sophocles, Aristotle and Plato.  I watched the first and last video lectures of each unit to get a feel for the unit.  It seemed that they were of as high a quality as the unit I used. Before I started I thought the Histories unit might be kind of boring, but Callihan held my interest and made me want to watch more! He is a great storyteller and makes the history come alive. 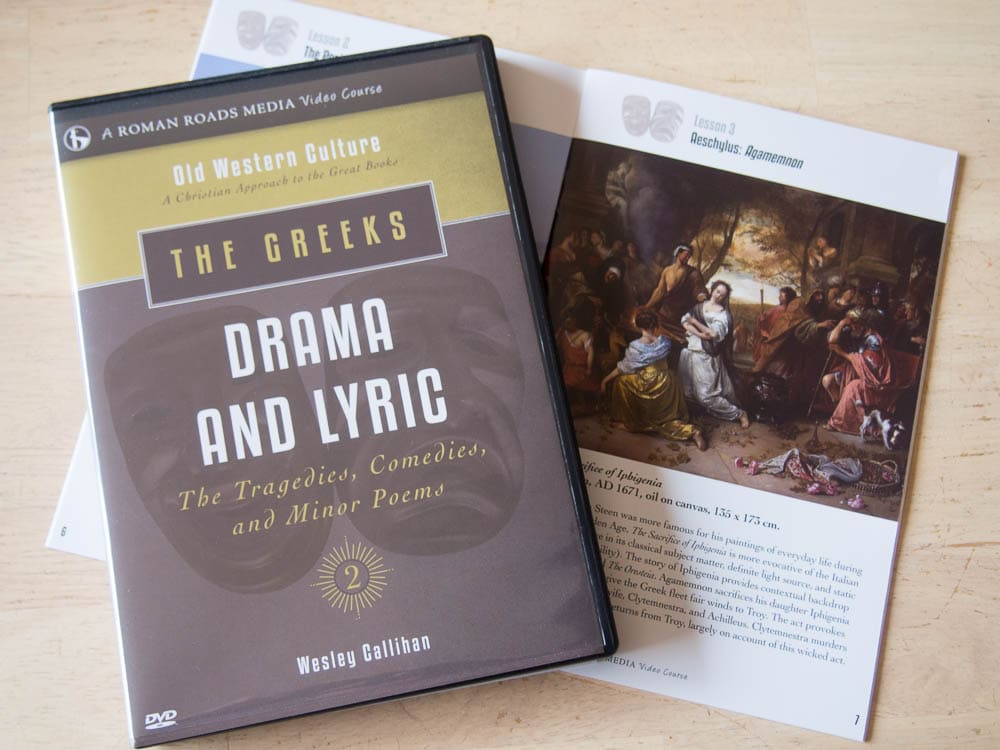 There is very little difference between the DVD sets and the online version.  With the DVD sets you do not get online quizzes, so the student would have to write out the answers to the questions or discuss them with a teacher.  So it would be easier for a student to be independent with the online version.  With the DVD set you get a hard copy of the Guide to Art pamphlet, not a pdf copy. When I use this with my son I’d prefer to have him discuss the answers with me rather than take a multiple choice quiz, because I think that provides deeper learning.  So I really don’t have a preference between the two, either one would work well for me since I wouldn’t use the online quizzes anyway.

The people behind Roman Roads come from a conservative Reformed Protestant viewpoint, and I am a liberal Catholic, so I am pretty far apart from them theologically.  But I had no issues with the religious content of this curriculum.  The lectures and quizzes were about the literature, and religion was rarely even alluded to in the lessons I completed.  I assume there is more religious content in The Philosophers unit, but from watching two lessons and looking over the workbook I don’t see this as being an issue for me at all.  I think a secular homeschooler could use the first three units of this with few issues, and the fourth one with some modifications.

I am planning to use this with my son next year for literature and history. While I didn’t have my son work through the lessons he did listen to some of the lectures when he was around, and enjoyed them.  The first time he was around when I was using it he came up to me afterwards and said, “That sounded interesting, what was it?” So I am optimistic that he will enjoy this study, although I am sure it is going to be a lot of work for him, because it does involve lots of reading.

The Greeks retails for $224 for both the Online Streaming and DVD versions of the curriculum, although right now the Online Streaming version is on sale for $199.  While it isn’t cheap, for the amount of material it covers the price is reasonable, because it easily covers two full subjects at the high school level.

Read more reviews of this and other products from Roman Roads here.