Salt Potatoes are a staple recipe in upstate New York. These creamy, buttery, bite sized potatoes are simple to make and delicious, especially drizzled with melted butter. They make an amazing addition to your outdoor barbecue or cookout. 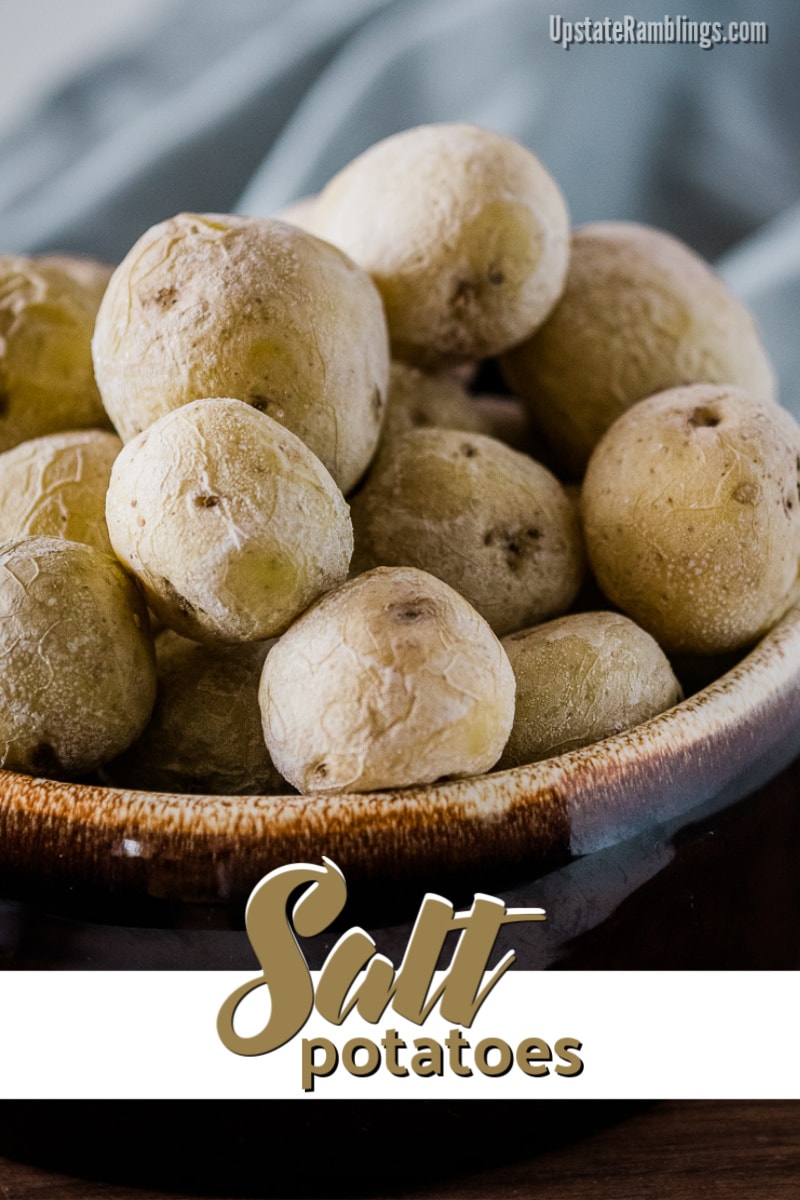 Every area has their own regional specialty recipes, and Upstate New York is no exception.  Sure, there are other specialties like Utica Greens and Chicken Riggies, but salt potatoes are in a class all by themselves. This side dish is not something I had ever heard of until I  moved here and met my husband, who was born and raised in Syracuse.

They are very popular in the Syracuse area, and my in-laws have them at every picnic. They either bring a camp stove for cooking them or put a pot of water on a charcoal grill to make them. It is not a cookout if you don’t serve these potatoes with lots of melted butter for dipping or drizzling over the tiny salt encrusted potatoes.

Now I know that to someone who has never tried them this recipe sounds odd, I mean it is just boiled potatoes. How good can they be? Well they are very, very good. Don’t let the simplicity of the recipe fool you, salt potatoes are the perfect combination of potatoes, salt and butter. 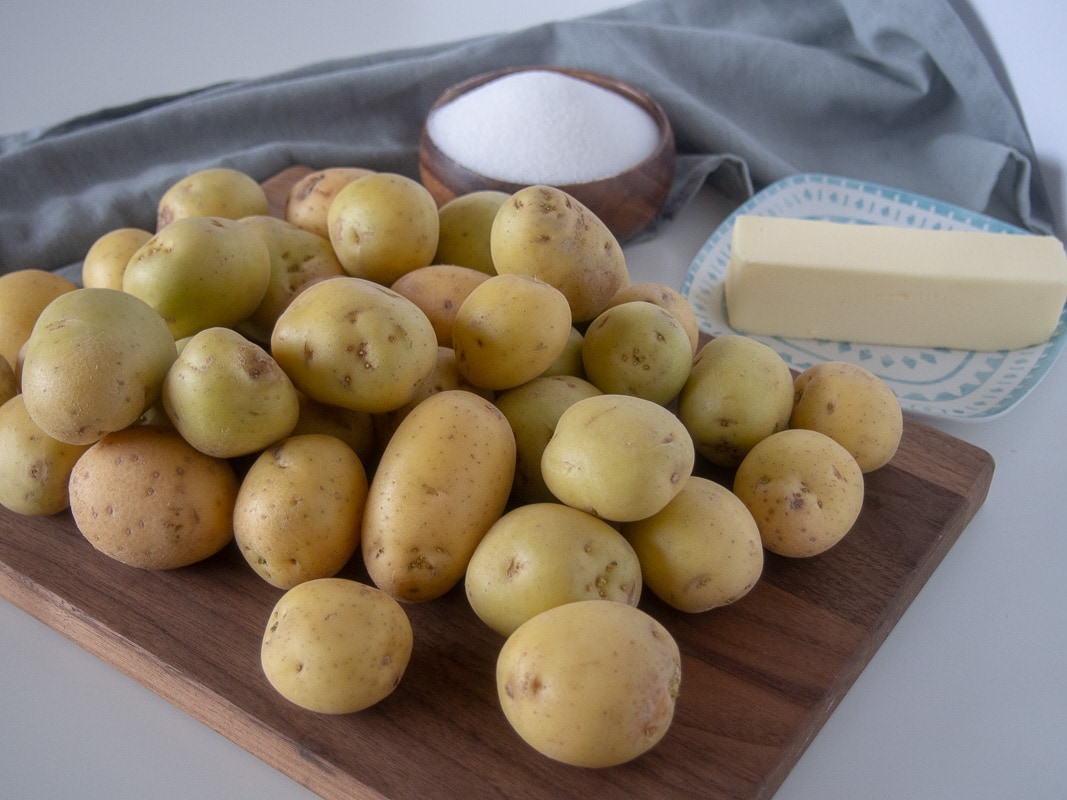 What Kind of Potatoes are used for Salt Potatoes?

The name pretty much gives away the ingredient list. But the potatoes are key, because you can’t use just any potatoes.

This potato recipe is made with small, new potatoes that are bite size or about 1 – 1 1/2 inches in diameter. If you live in upstate New York all the grocery stores sell prepacked bags of salt potatoes, but you don’t need to buy them that way. The bags just contain potatoes and salt, there is no secret ingredient! 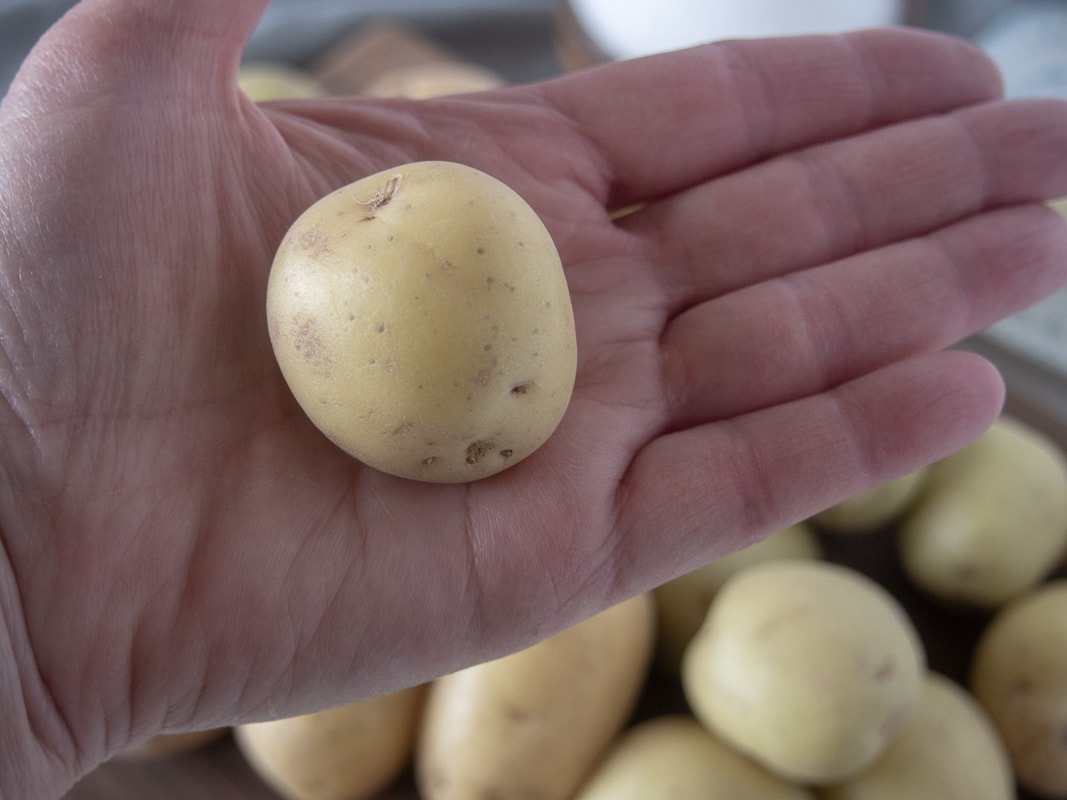 I prefer not to buy the prepackaged bags because I like to select my own potatoes. My family prefers our salt potatoes to be on the small size, and the bags tend to have potatoes that are closer to 2 to 2 1/2 inches. You can use small white or yellow potatoes. Red potatoes are not as creamy, and creamy potatoes is the entire point of this recipe, so don’t use red potatoes.

How Do You Make Salt Potatoes?

The recipe is embarrassingly simple. You put a pot of water on the stove, add the salt and bring it to a boil. The first time you make them you are going to be thinking, “Seriously, the amount of salt in this recipe is a misprint isn’t it?” But no, it’s not a misprint, and yes, you are supposed to add two full cups of salt. 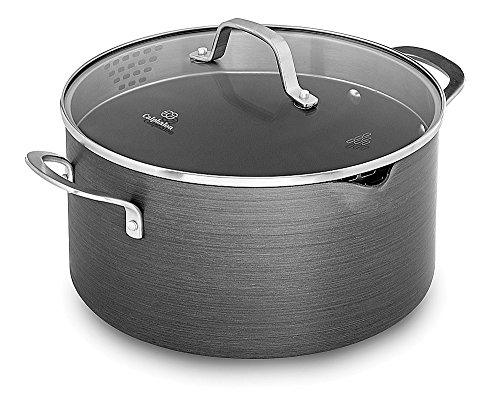 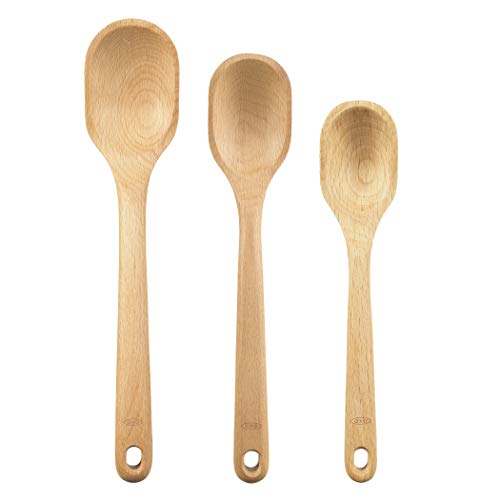 Even though this recipe is simple it isn’t foolproof. This recipe depends on the ratio between the salt and the water. So you do actually need to measure the amount of water you put in the pot. Don’t just fill the pot up, measure out 3 quarts of water.

You also want to be careful with the size of the pot you use for these potatoes. You will end up with salt crusted all over the pan that the potatoes cook in. If you choose a pan that is too small some of that salt will end up out of the pot and all over your stove. So minimize your cleanup and make the potatoes in a pot that is large for the amount of water you are using. 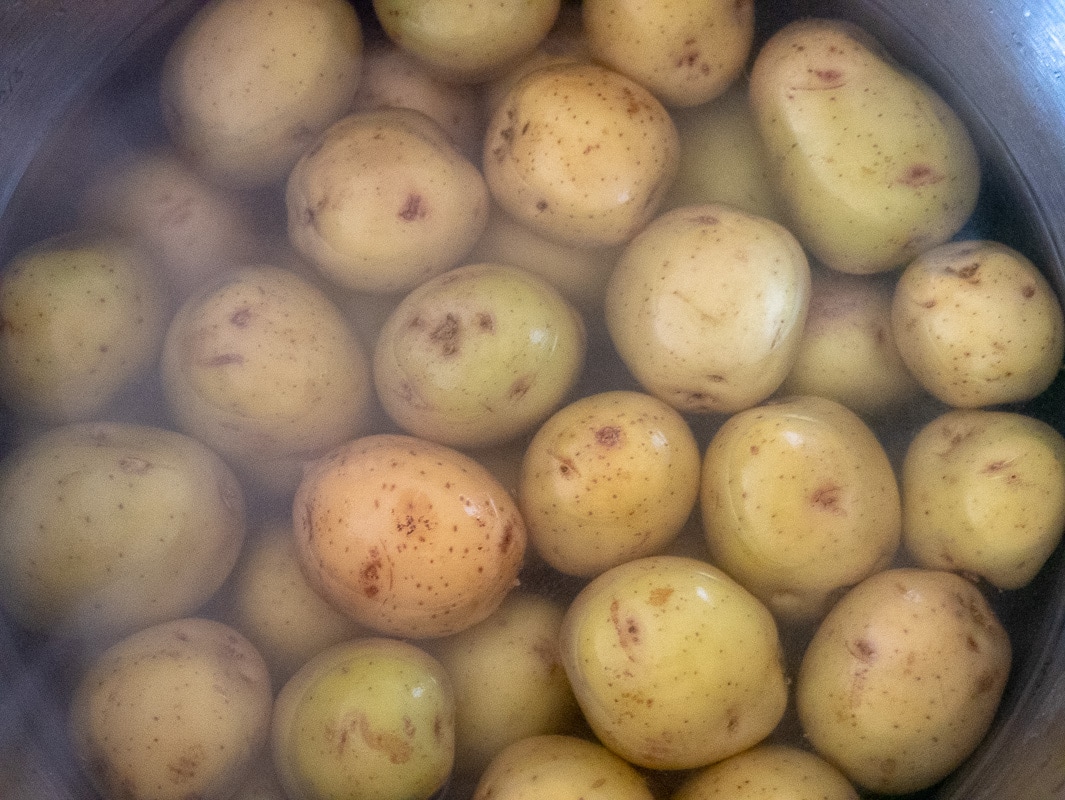 Stir to dissolve the salt and then add the potatoes. Let them boil for 15-20 minutes until a fork slides easily into a potato. Then take them off the heat and drain them in a colander. 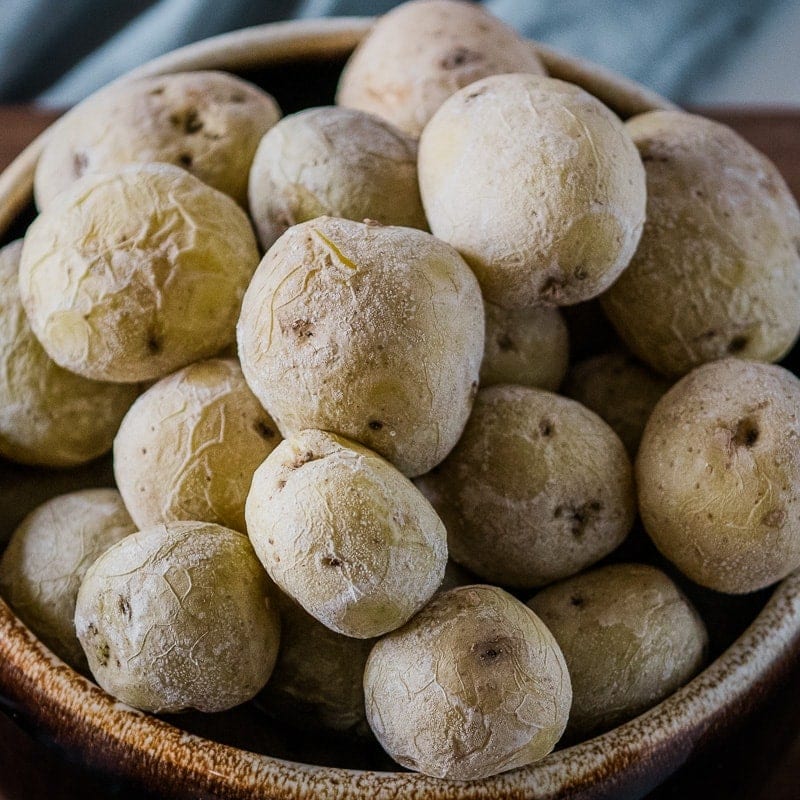 Let the potatoes sit a couple minutes, and as the water evaporates from their skin a small crust of salt will appear on the potatoes.

The idea behind this dish is a simple chemical process. Adding salt to water increases the boiling point of the water. Adding so much salt to the water also creates a extremely super saturated solution of salt and water.

This has a number of effects. First the higher boiling temperature of the water means that the starch in the potatoes cooks more completely, making a creamier potato. Secondly the salt seals the skin of the potatoes, so that they don’t become soggy. And lastly as the potatoes cool the super saturated solution crystallizes on the potatoes, leaving them with a thin salt crust. 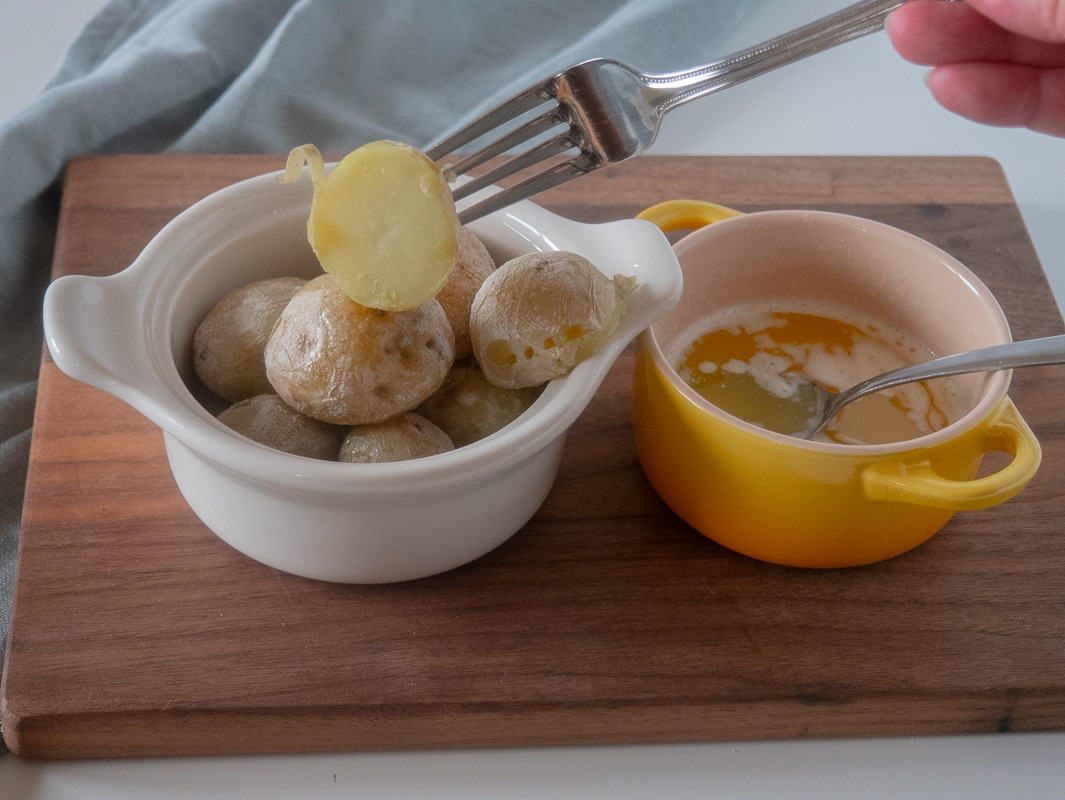 Origin of this Recipe

Syracuse has a long history of salt production, since there are salt springs that feed Onondaga Lake and the area used to be a major producer of salt. Now a days I think most of the salt produced is used for de-icing roads, not eating. But since there is a lot of need for de-icing during the Syracuse winter that works out!

Tradition says that salt potatoes were popularized by the Irish miners who worked at the salt mines, brought potatoes to work for lunch and boiled the potatoes in the salty water. Who knows if this is true, but it certainly sounds believable. 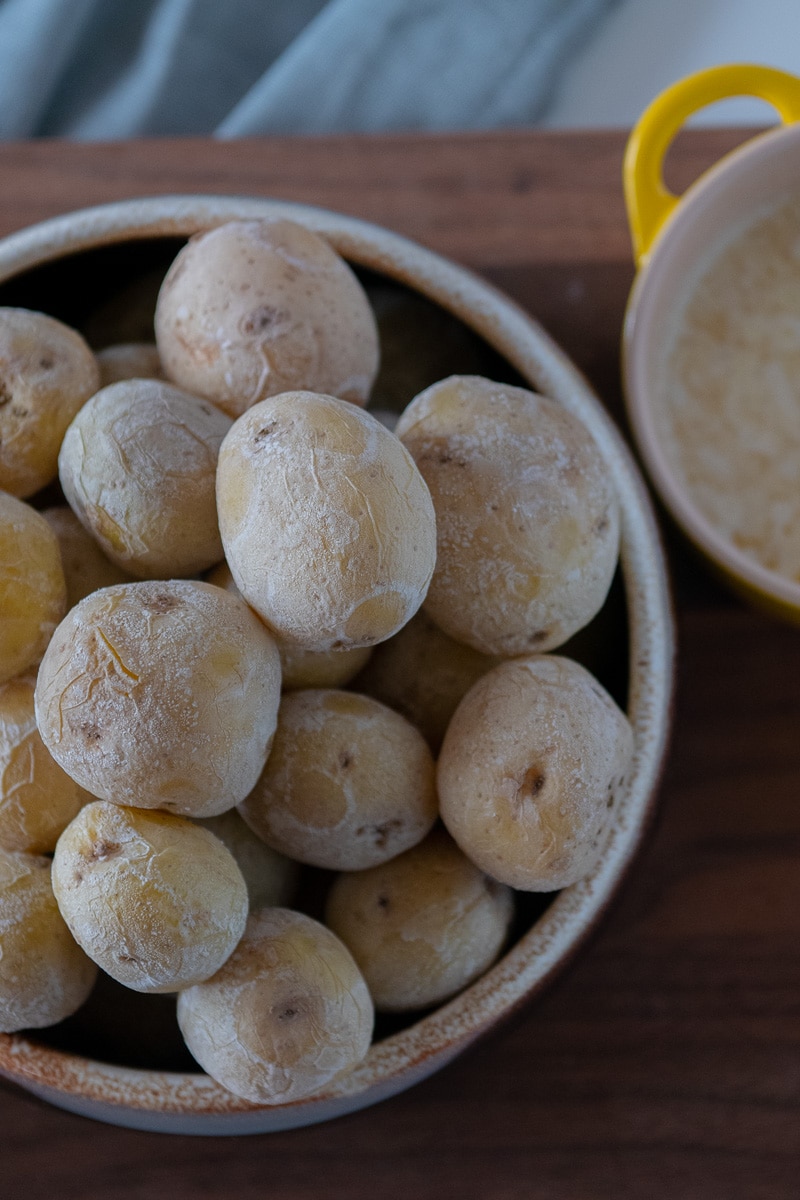 This salt potato recipe calls for a lot of potatoes. And you could halve the recipe, but why bother? Even if you aren’t making these for a crowd these potatoes are delicious as leftovers. If we have any leftovers I either make them into potato salad or fry them up. They are great as hash browns for breakfast or made into a hash with sausage for dinner. 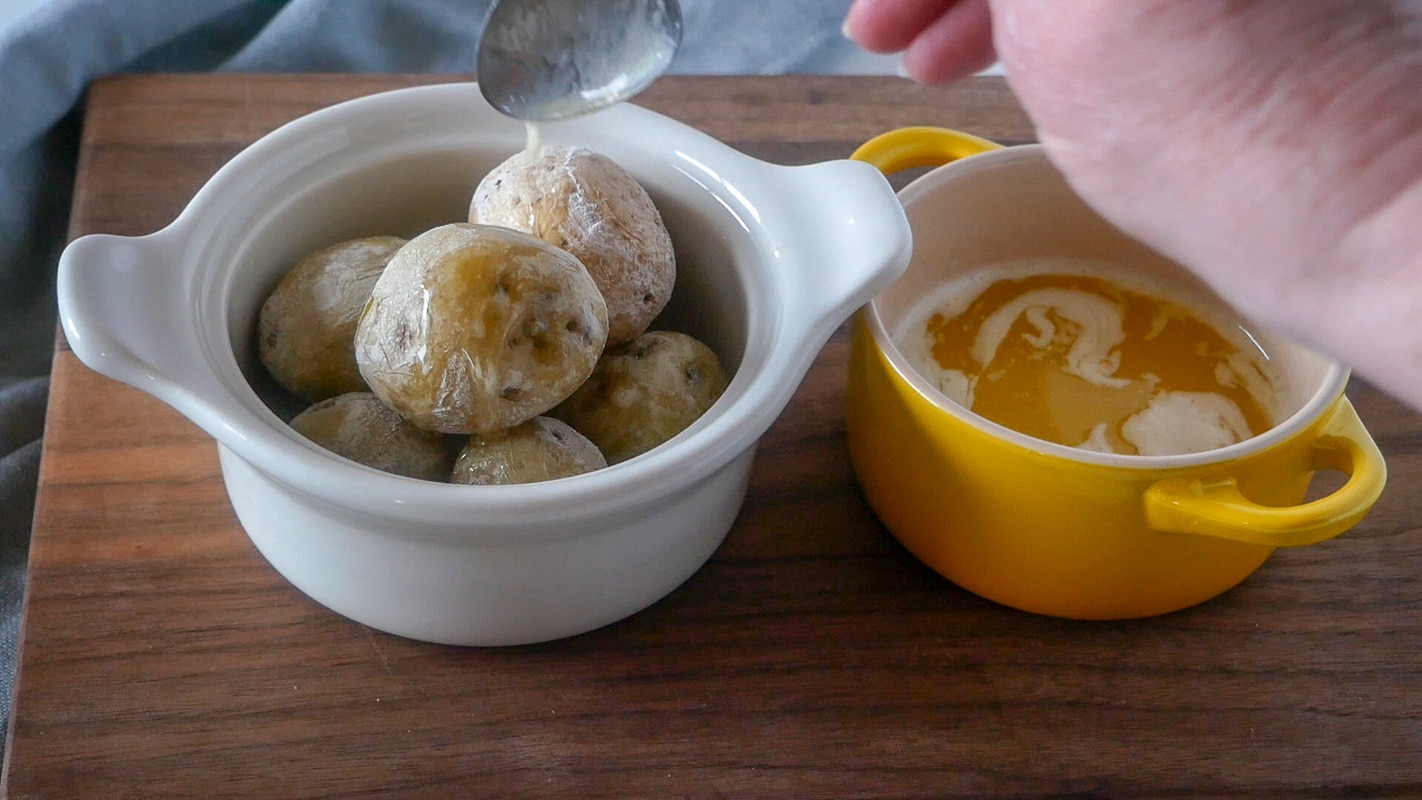 If you have never tried salt potatoes you should! Don’t be deceived by the simple recipe, these are potatoes on a whole a new level. The potatoes are tender, creamy, perfectly seasoned and filled with buttery goodness. Make some this summer and you will be serving them at all your cookouts too.

The ratio of salt to water is crucial to this recipe. So measure the amount of water you put into your pot. Don't just fill a big pot with water and add the salt and potatoes. 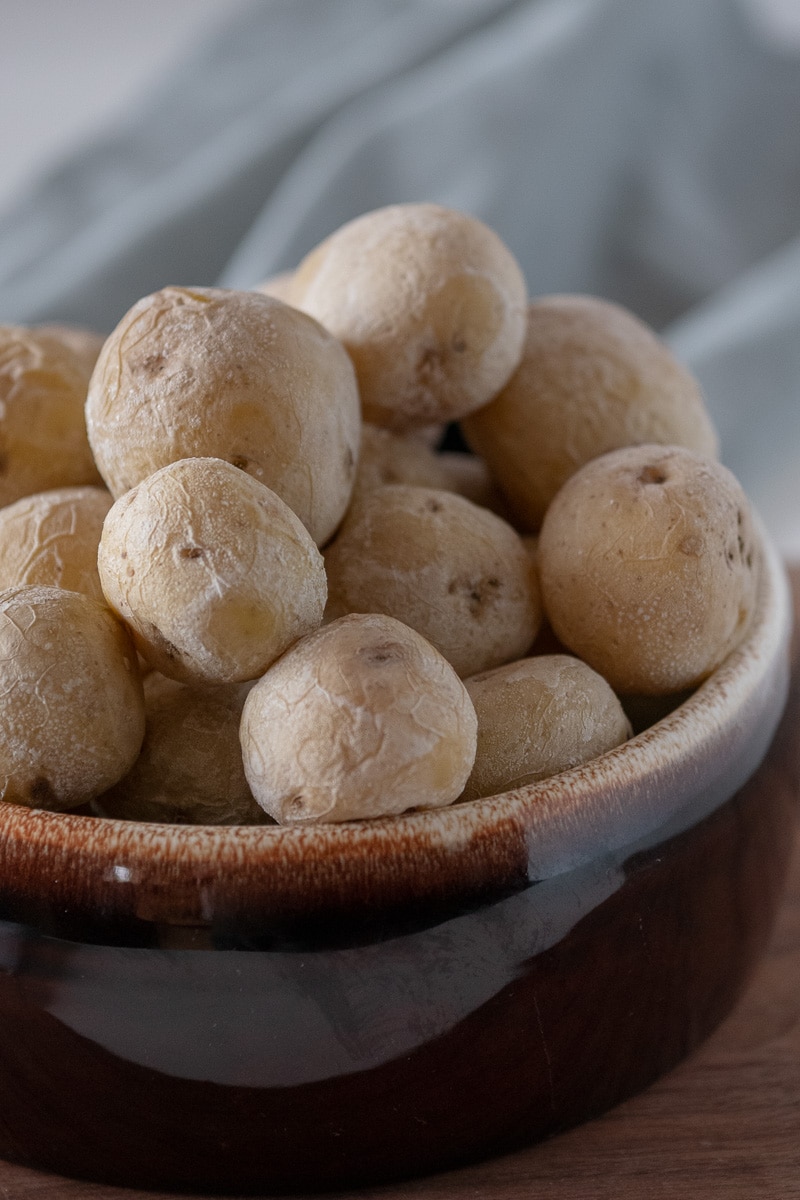 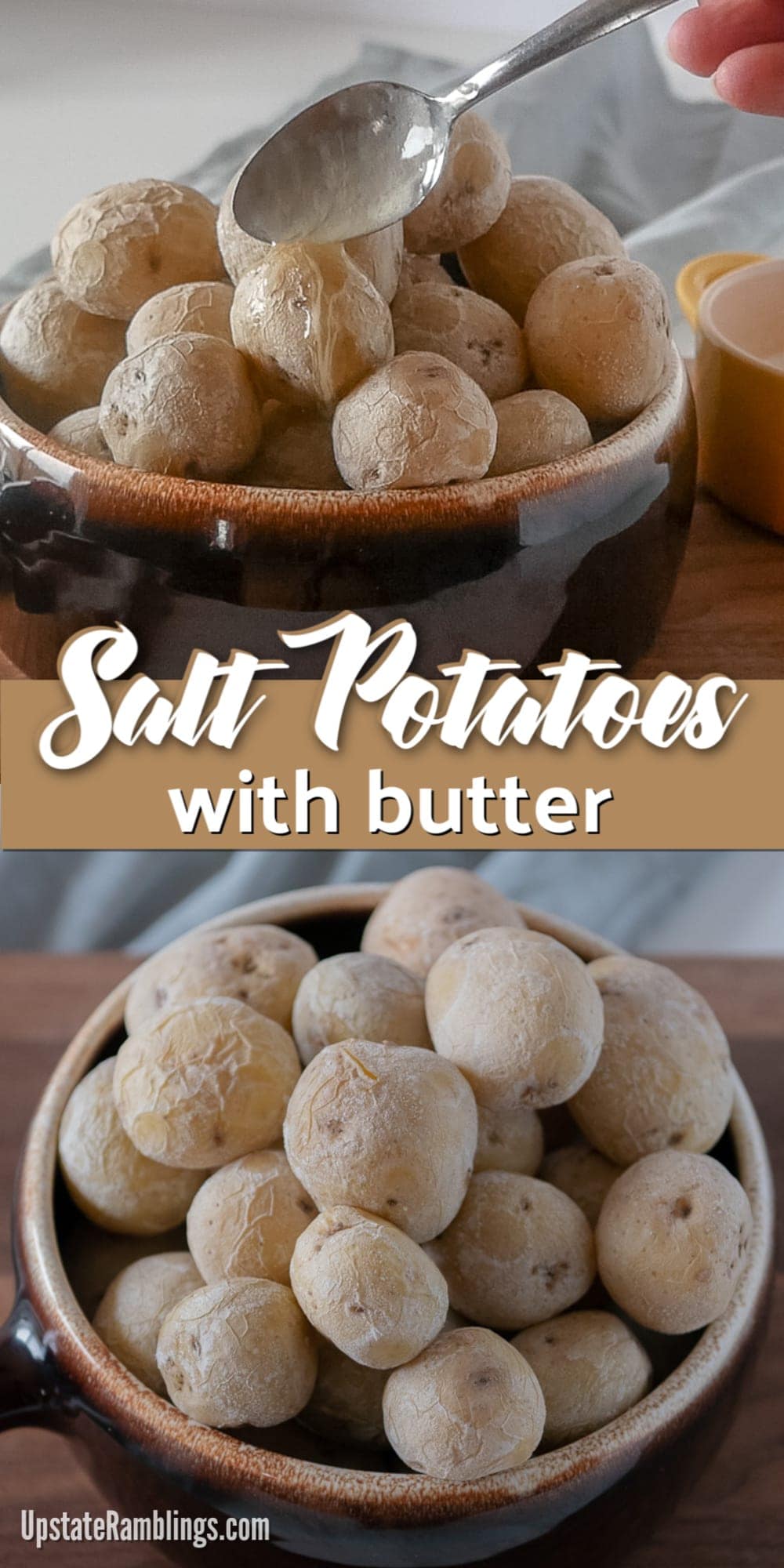