My family enjoys playing board games together, so we were happy to get the chance to review The Presidential Game, which bills itself as “The Most Powerful Game in the World.”  This game was both fun to play and educational, which made it a huge hit at my house.

The game simulates a U.S. Presidential election, and is played by two teams, the Republicans and the Democrats, who battle for control of the country. Teams play for a predetermined number of weeks of a campaign, and the team that has more than 270 votes at the end of the game is the winner.  Game play moves along at a good pace, with games lasting anywhere from 45 minutes to an hour and half. 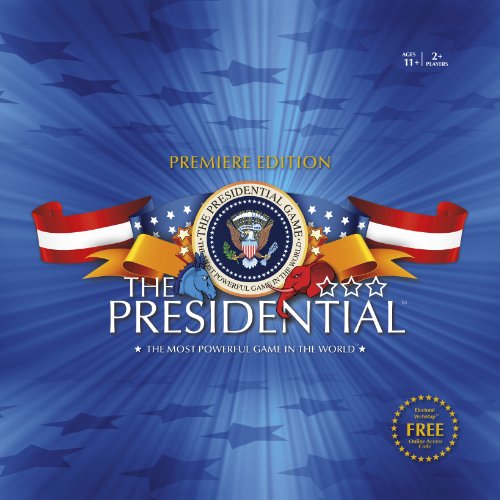 During each turn the team decides if it is going to fundraise or campaign.  Campaigning can occur anywhere, but fundraising can only occur in four states, California, New York, Texas and Florida.  Winning those states and their electoral votes is vital to getting to 270 electoral votes.  If you fundraise you also get to draw a Politics card, which randomly give you extra votes in states or take them away.  These cards have things on them like “You drive a domestic car, your opponent owns foreign cars, add 4 votes in Michigan.” My kids liked the random and sometimes amusing Politics cards, and the game even has blank ones so you can make your own.

There is quite a bit of strategy in the game, and plotting to steal states from the other team makes it exciting.  The first time we played I swept in at the last minute and stole Pennsylvania from the kids to win the game. Since they had led the entire game they were really annoyed!

At first my kids were a little disappointed that they had to play on teams, since we usually play games that have 4 or 5 players.  But once they stated playing they realized that the team play make it more fun.  Sometimes it is quite challenging to get a team to agree on a strategy!

The players in the game decide before the game starts how many weeks the campaign will run. This is nice because you can make the game longer or shorter depending on how much time you have.  The rules suggest playing for 30 weeks, but we find using 20 weeks works well for us, because it is long enough but adds some time pressure to the game play. 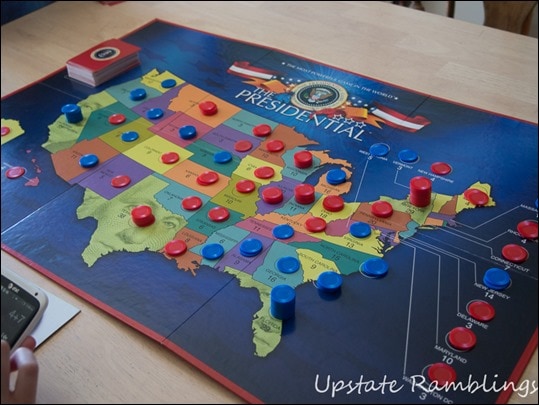 You keep score on score pads, or you can use an online electoral vote tabulator that automatically lets you know the electoral vote total at the end of each round.  It is fun to watch the votes switch back and forth as the game goes on, just like it does in a real election.

We play games very frequently, and have quite a large collection.  Many times we find that educational games are not as fun to play, but this game is very exciting!  It really brings out the competitive spirit in my teens, and has great replayability. They really want to play it with their grandparents the next time they come over, and I think bigger teams will be even better.

My 14 and 17 year old are studying Government this year, and the have definitely learned about the election process from this game.  It does give a good understanding about how the electoral college works, and why some states are more important than others in politics.

Presidential Game may be purchased on Amazon. It is recommended for ages 11 and up, which seems about right to me. Younger children could certainly participate as part of team though. Click to read more reviews from the Schoolhouse Review Crew

3 thoughts on “The Presidential Game Review”