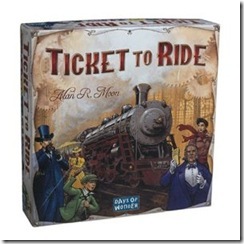 We play lots of board games in my house, and while sometimes I get sent games to review we have quite a few that we play regularly that we bought ourselves.  So I’ve decided to start posting board game reviews every Thursday, to encourage other families to try some of these fun family games.  Today I want to review one of my personal favorite games, Ticket To Ride.

This is a game with a very simple concept – you build train routes across the United States, and the person who builds the best routes wins.  One of the things I like best about this game is that it is very easy to learn, but is different every time you play it.  There is a deck of cards with different train routes across the country, and each player is randomly dealt 3 route cards.  You can discard one if you like, and must complete the routes on the cards you keep.  The routes have different point values based on how long they are â€“ New York to Los Angeles is worth more than Denver to Santa Fe.  Different colored trains connect cities on the board, and to claim a route you must collect and play colored train cars the same color as the route on the board. 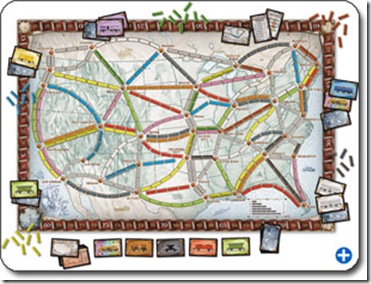 On every turn you can either draw two colored train cars, play some of the colored cards in your hand to connect two cities, or draw more destination cards to get additional routes to complete.  One of the things that makes the game interesting is that there are so many route cards it is different every time you play.  There are a number of different strategies, you can either try to complete many short routes, or just a few long routes. Many times the strategy is determined by the cards you are dealt, so you can’t always play the way you want.  It is possible to deliberately (or accidentally) block other people, since there are a limited number of ways into and out of each city.  So you can have your entire strategy destroyed very quickly if a route you need gets taken by someone else.

You can also get expansion packs for the game.  We use the 1910 expansion pack, which is played on the same board but includes even more routes, and a number of suggested game variations, such as only connecting big cities.  The expansion pack also contains replacement game cards which are bigger and easier to handle.  This game can be played with 2-5 players, and I love the fact that everyone can play.  It is fun for all ages, and even the youngest players win sometimes.  It only takes about 45 minutes to an hour to play, so it is fast paced and doesn’t drag on.  All in all Ticket to Ride is a great game which can be played over and over.