This recipe for Sous Vide Beef Tenderloin gives you the perfect roast every time. And an elegant beef tenderloin is the perfect centerpiece for a special dinner like Christmas Day or New Year’s that is delicious and surprisingly easy to make. 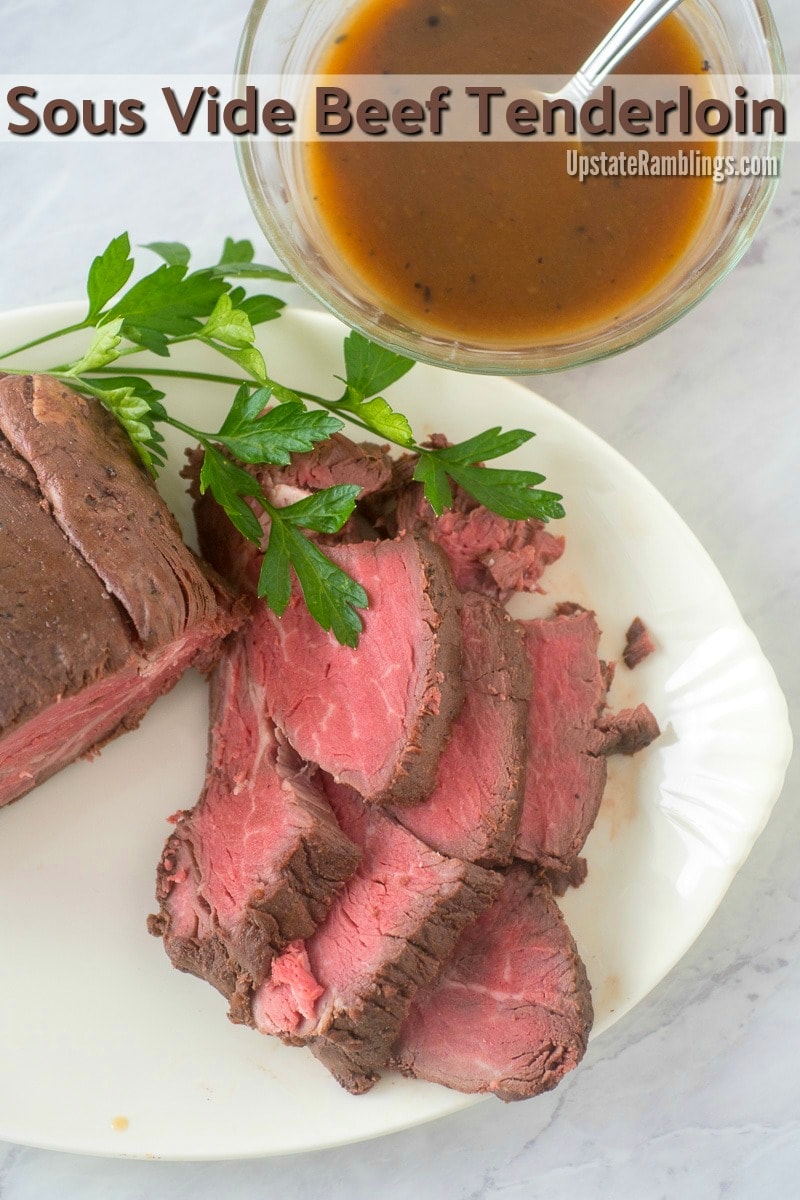 Why is Sous Vide Ideal for Beef Tenderloin

Unfortunately, it is extremely easy to over cook a beef tenderloin. Tenderloin is very lean and doesn’t have much fat, which means that it is best served rare or medium-rare.

If you let the center of the roast get much past 140°F it will end up being dry and tough. This means if you are roasting it in the oven you need an accurate meat thermometer, and you need to watch it very, very carefully or you will cook away the tenderness that makes it so highly prized. 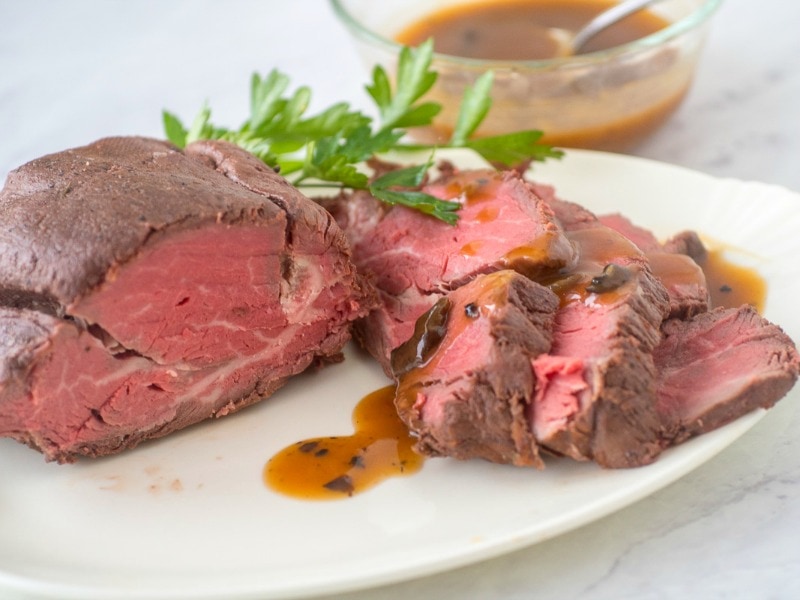 Before I got a sous vide cooker I solved this issue in the most practical way – I simply never bought a beef tenderloin roast. While this did prevent me from over cooking an expensive piece of meat it also meant I didn’t get to enjoy it very often.

Sous vide uses a water bath to keep the meat at a constant temperature. You set the cooker to the internal temperature you want the tenderloin to reach and after the water bath reaches that temperature it stays there.

So with a sous vide cooker it is almost impossible to over cook a piece of meat, because the temperature will simply not get high enough. Sous vide cooking means you can cook with precision and have a foolproof, perfectly cooked dinner every time.

And more than that it makes cooking something like beef tenderloin easy – once you have the meat in the sous vide cooker there isn’t much else to do. You can socialize with your guests or whip up some delicious side dishes to complement the main course. 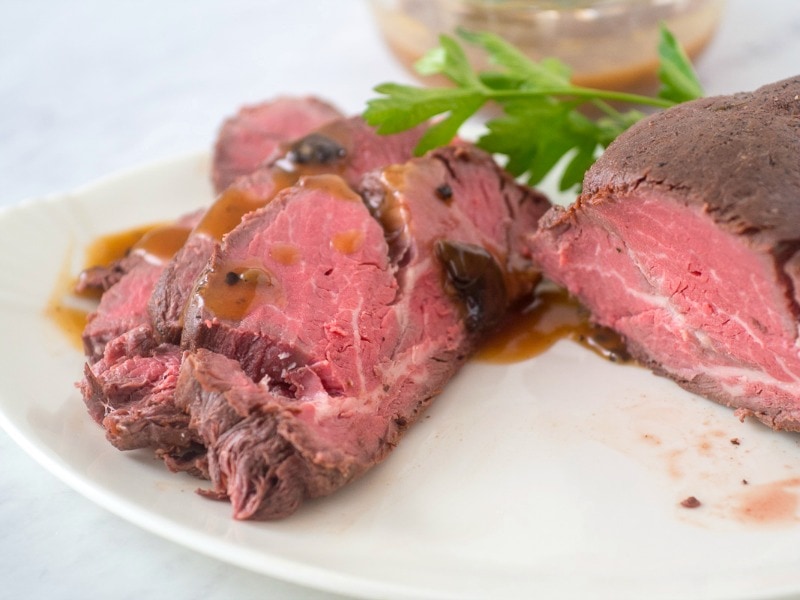 What Temperature to Cook Beef Tenderloin To?

Here are the temperatures for cooking beef tenderloin

I set my cooker at 137°F for this dish and I thought that was just about perfect. If you are going to use a temperature under 130°F you need to be more careful about food safety because that might not be high enough to kill food born microbes, so I would not advise using a temperature that low.

If you are going to use a temperature over 145°F the tenderness of the meat will be affected, so I probably wouldn’t bother with such an expensive piece of meat.

Unlike a conventional roast a sous vide roast will not continue to increase in temperature as it rests, so you want to cook it to your desired end temperature. 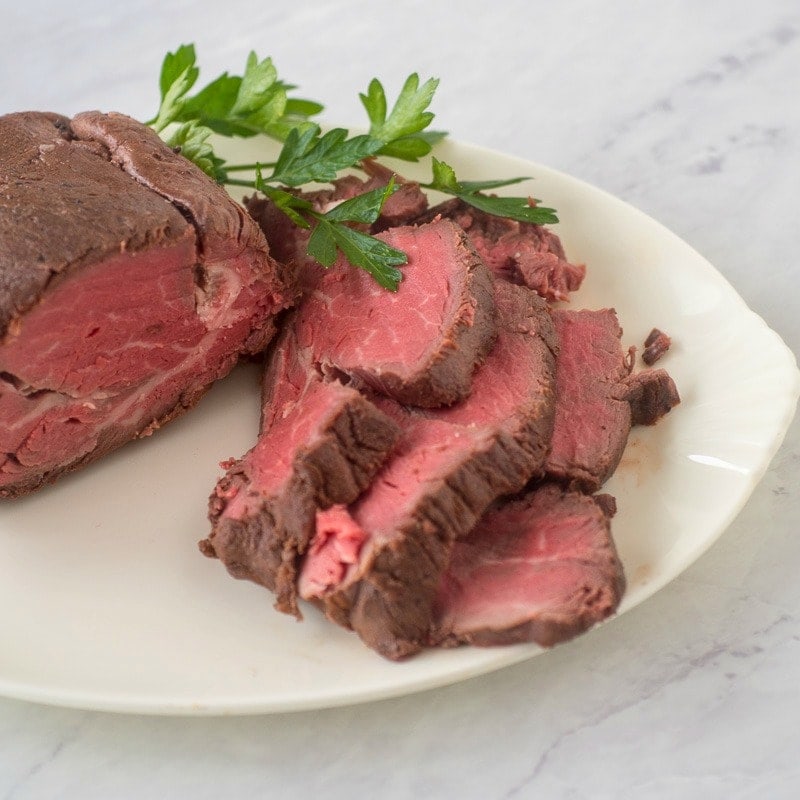 How to Cook Beef Tenderloin

The goal of cooking the beef tenderloin is to have the exterior browned while the interior stays juicy and rare. The sous vide water bath takes care of making the interior the perfect temperature, but to get the outside brown you need to sear the meat.

I seared the meat twice, once before adding to the cooker and once after it was done. Searing the roast before you cook it adds flavor as it cooks, and searing again at the end makes it look better.

And if I am serving $35 a pound meat to my family and friends I want them to admire the finished dish and think it looks elegant!

The first step in the process is to start the sous vide cooker going, though so the water bath can come up to temperature while you sear the meat. Then I heated olive oil in a cast iron skillet and used salt and pepper to season the meat.

I seared the tenderloin on all sides in the skillet, turning it so it was nice and brown, which took about 5 minutes. You can also sear the beef tenderloin on a grill if the weather is nice. 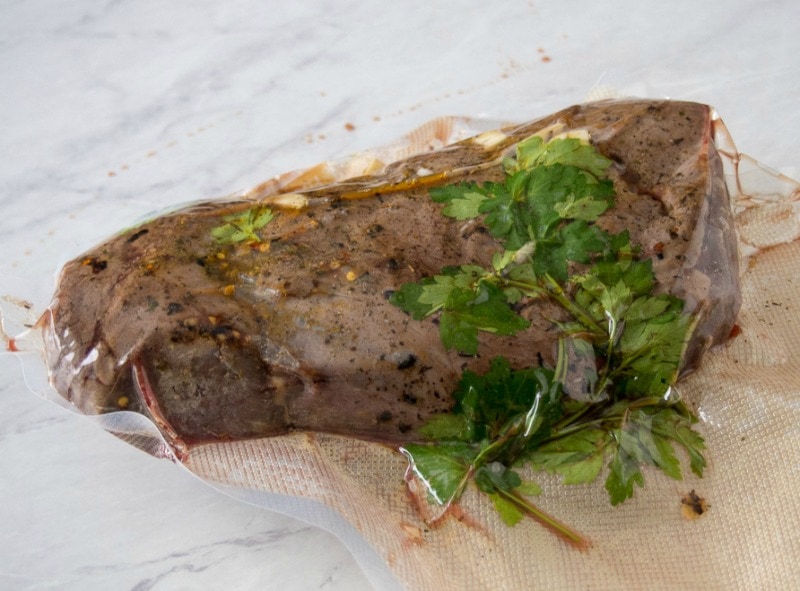 Then I put the tenderloin in a FoodSaver vacuum sealer bag along with some parsley and garlic. Other herbs like rosemary or thyme would also work well to flavor the tenderloin as it cooks.

If you don’t have a FoodSaver a ziploc bag will work fine, although you might want to let the beef tenderloin cool for a few minutes before adding to a plastic baggie. 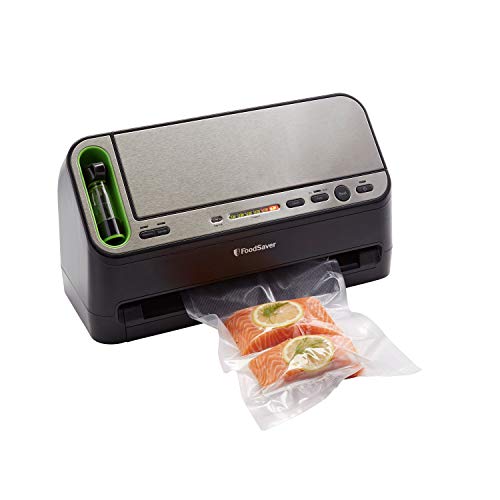 Then it is simply a matter of letting the beef tenderloin cook in the sous vide water bath for 2-3 hours. This gives you plenty of time to make some tasty side dishes to go along with the roast, like roast squash and fennel or Utica greens. 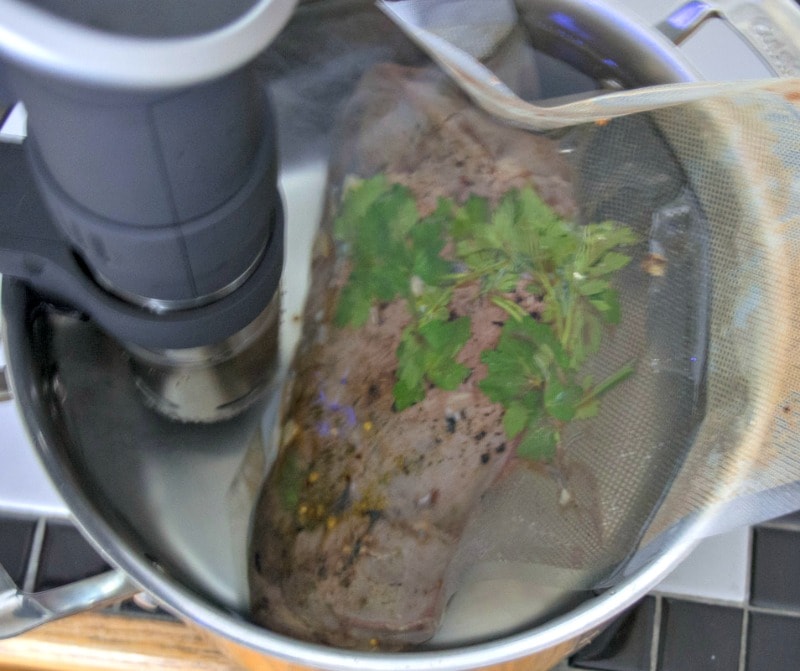 I wanted to make a sauce for the beef tenderloin and since there was plenty of time I started it while the tenderloin was in the sous vide cooker. Using the same cast iron skillet I had used to sear I sauteed some mushrooms in olive oil and set them aside. 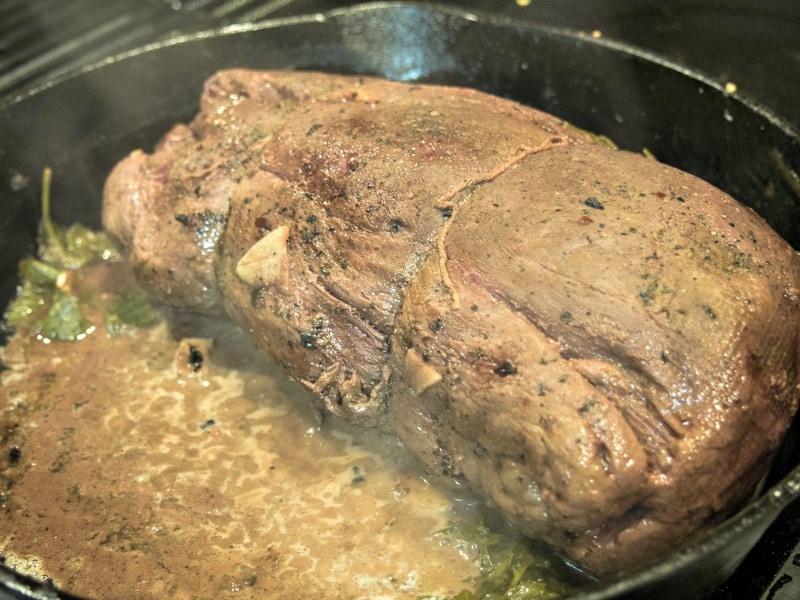 To make the sauce I returned the mushrooms to the skillet and stirred in a couple of tablespoons of flour. Then I poured in the juices that were left in the sous vide bag and added some beef broth to the skillet.

After a few minutes of stirring the sauce started to bubble and thickened, making a tasty gravy for the beef tenderloin. 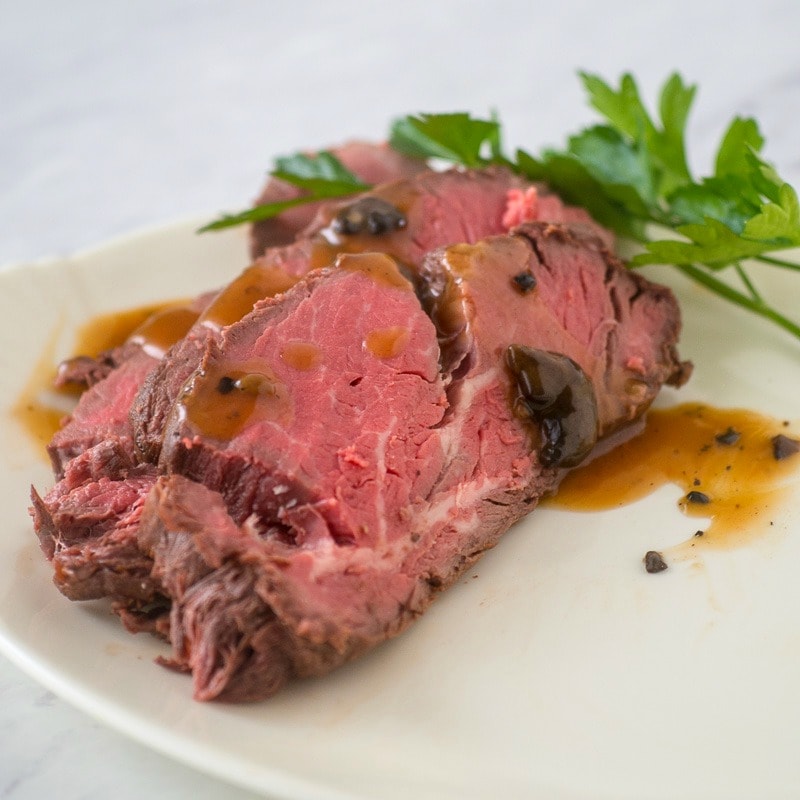 To serve the sous vide beef tenderloin I sliced it into thick medallion like slices and served it with the mushroom sauce. It was delicious, and the best tasting dinner I’ve made all year.

This is kind of ironic, because there have been plenty of meals I have made that involved a lot more time and effort on my part, but it turns out that an expensive cut of meat cooked perfectly can be very simple after all.

This is perfect for serving at a holiday dinner like Christmas or anytime you are celebrating a special occasion. 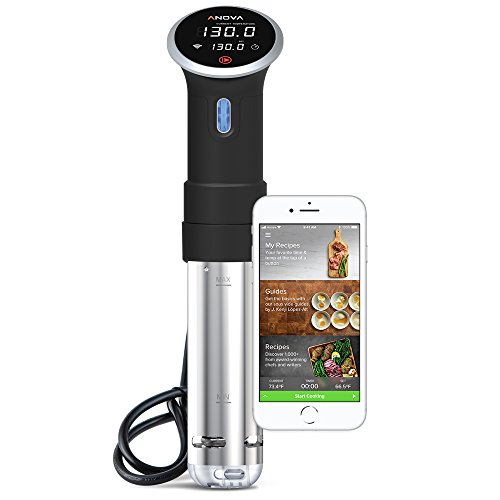 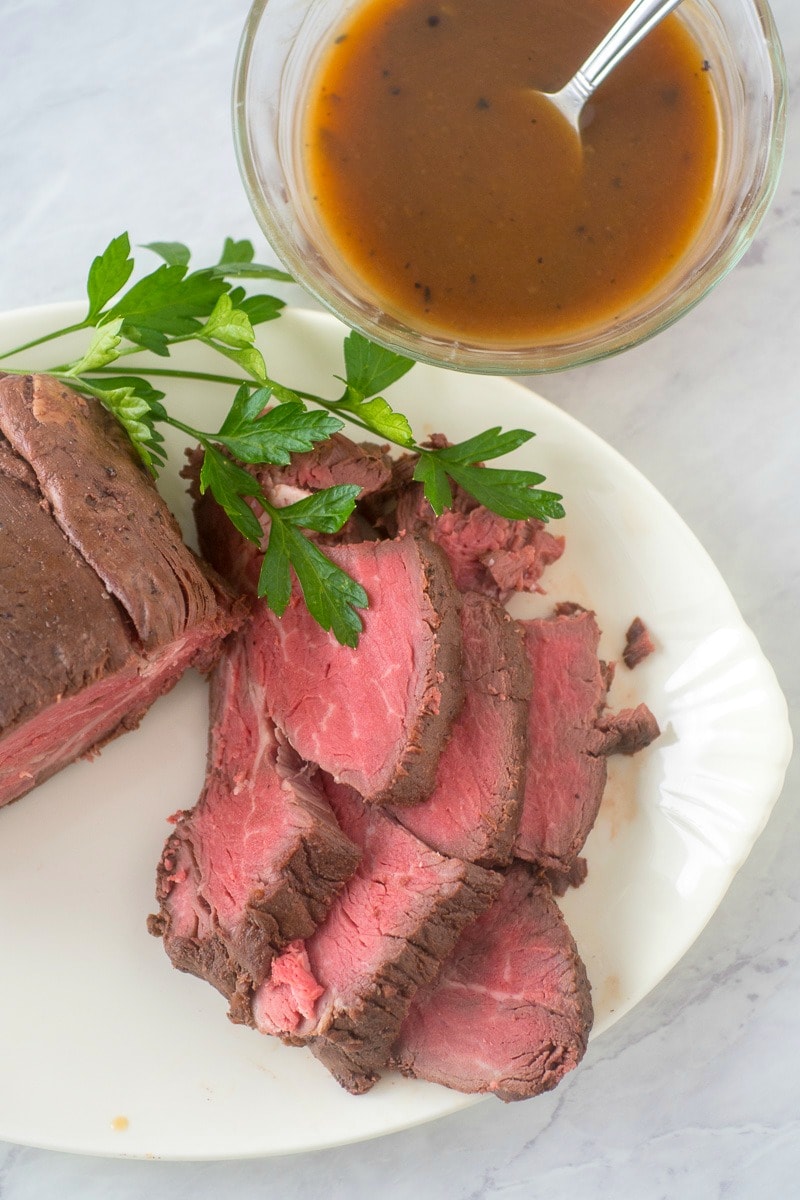 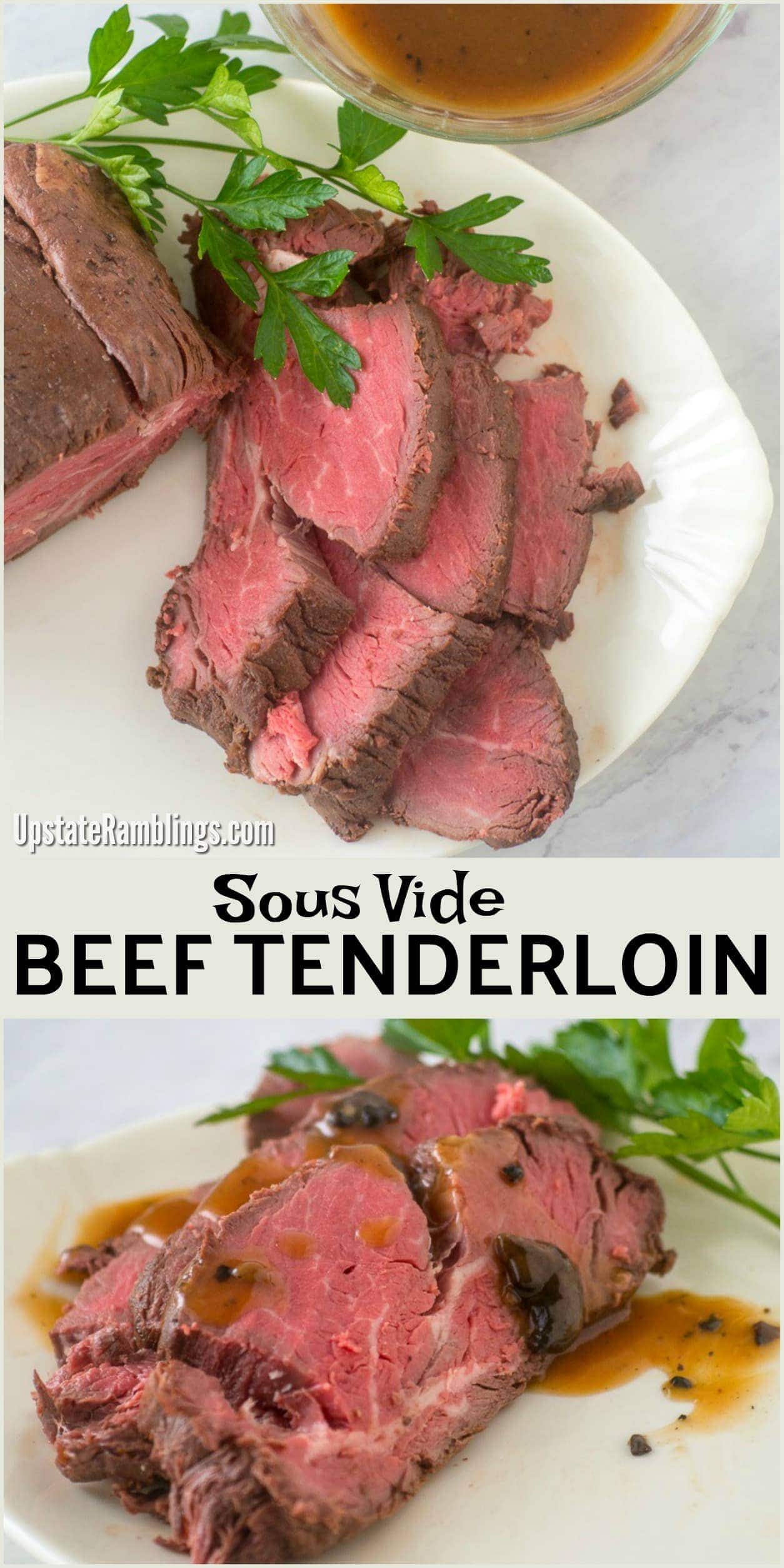