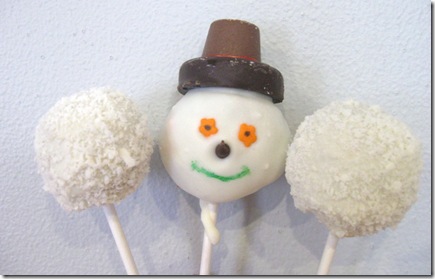 Have you seen cake pops?  They are super cute little cakes on a stick that are easy to make and fun to decorate.  Iâ€™ve been seeing them on the web a lot lately, and have been meaning to try making them.  This weekend my 14 year old daughterâ€™s dance class was cancelled, so we had about 3 hours of unexpected time to fill.  Now there are many household chores we probably should have done, but I decided we should take advantage of this unexpected time and spend some mother-daughter time bonding.  And what is better way to bond than making cute, yummy, bite-sized sweets?

The process of making cake pops is pretty easy, you make a cake, crumble it up, mix in a can of frosting and form it into little balls or other shapes. 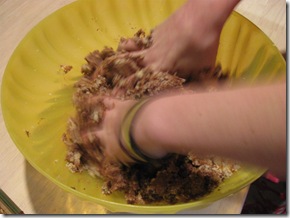 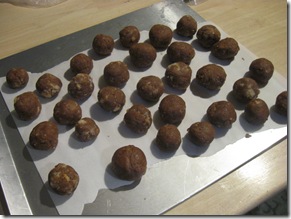 Then you put the balls on a stick and decorate them with melted chocolate.  We made the balls Friday night, and spent Saturday morning decorating.  We decided on a snow theme, because we have lots of snow, so it seemed seasonal. 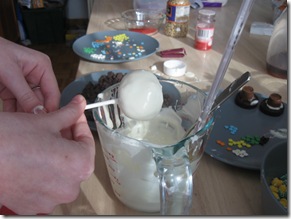 First we rolled the balls in melted white candy melts.  In the beginning we melted the candy melts in the microwave, but after a while it stopped being smooth, I assume because of the multiple heating and cooling that was going on.  So we ended up changing to using an improvised double boiler to melt the chocolate, and this resulted in a much smoother coating. 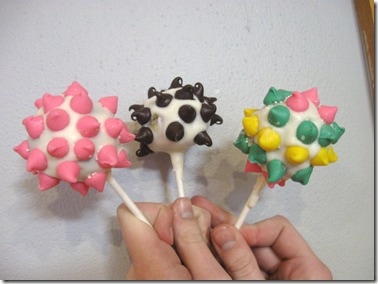 We had a low budget for this project, so to decorate we mostly used what we had on hand in the pantry, which included some sprinkles, chocolate chips, colored mints, and coconut.  We decided to start off with a simple design called â€œspikey ballsâ€.  These were easy to make and looked pretty good.

After we had practiced a few simple designs we moved on to making snowmen.  We tried to make some with two balls on the stick, but they were too top heavy and ended up toppling over (or melting, as we called it.)  So we ditched that idea and stuck with snowmen made from one cake ball.  We used sprinkles for the eyes, a mini-chocolate chip for the nose and drew a mouth on with edible color markers.  We discovered that the markers donâ€™t work nearly as well as we had hoped on candy melts. 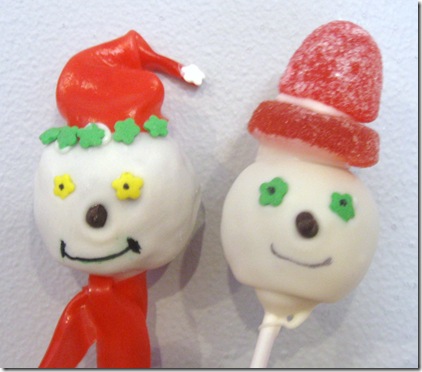 To make hats for the snowmen we went to the bulk candy section of the grocery store and looked around for candy that was the right size and shape.  For the chocolate hats shown at the top of the post we used York Peppermint Patties topped with Rolo candies, and we also used gum drops to make colored hats.  I saw some great looking snowmen online that used rolled fondant for hats, but since we didnâ€™t have any fondant we tried fruit rollups.  The fruit rollup hats looked good, but they were way too sweet as far as I was concerned.  The chocolate hats were my favorite, and they were the ones that got eaten fastest too.

The whole process was tons of fun.  My daughter is very artistic, and she really enjoyed decorating and planning the pops.  She was so proud of the designs she put some in her lunch box this morning to show off to her friends eat for dessert.