Skip to content
As an Amazon Associate I earn from qualifying purchases. Read my disclosure policy.
Jump to How-To

The Big Football Game will be here before you know it! My family and I love football, and this year for extra football party fun we decided to build the ultimate Football Snack Stadium!

This post was compensated by Collective Bias, Inc. and its advertiser. All opinions are mine alone.

This Super Bowl Snack Stadium is full of tasty treats and so impressive that will make your football party the hit of the neighborhood, and it is easy to make too.

My stadium consists of slanted “stands” filled with snacks that surround a field made from salsa. To make the stands we used the cardboard soda boxes from the soda I bought for the party, which is a great way to use what you already have. These stands are light and portable and large enough to hold lots and lots of yummy snacks for a huge football party. 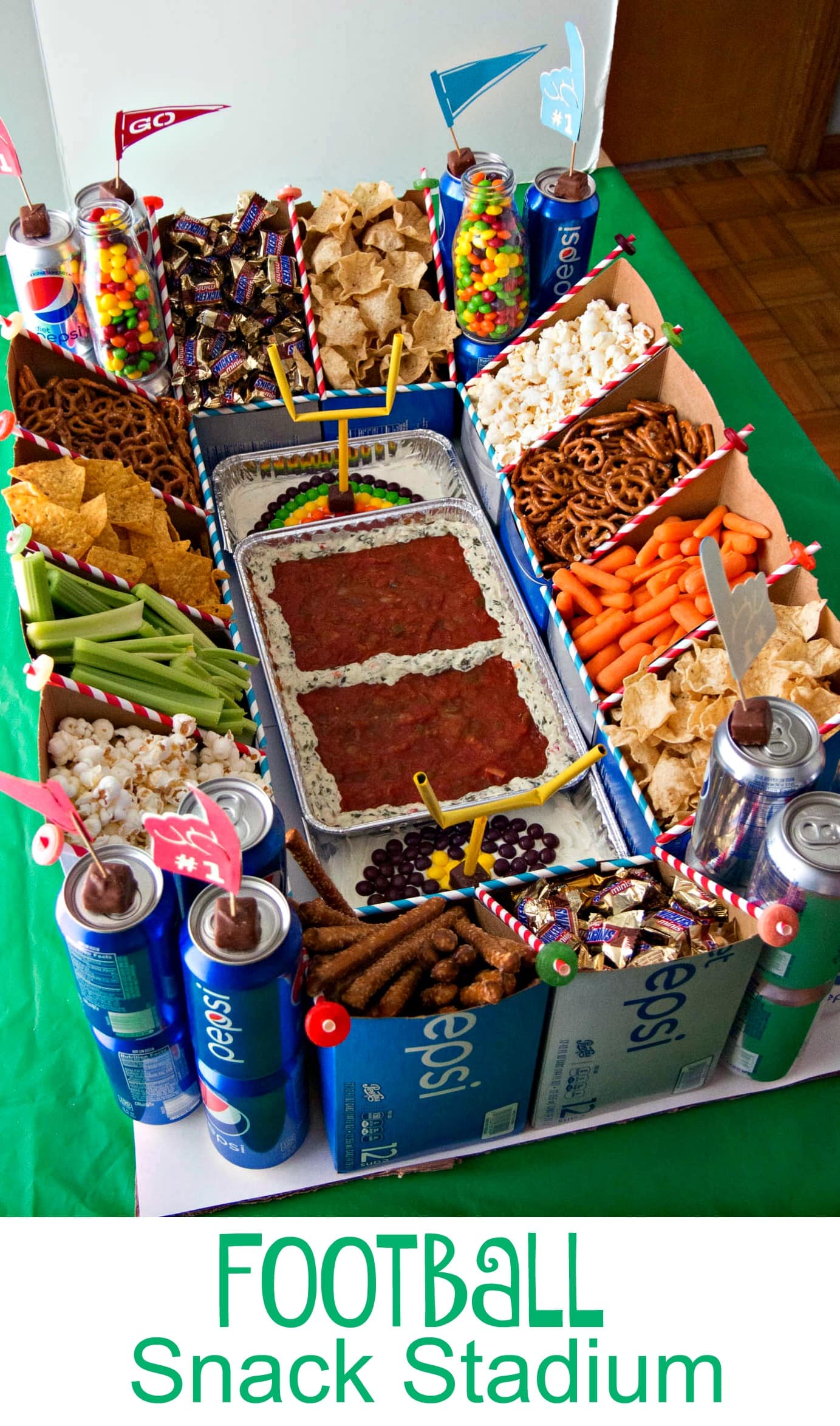 My teenage son is excited about the idea of throwing a big, themed football party this year, so we worked together to create our stadium. To make the stands I used 12 packs of soda that I bought for the party.

First we carefully cut each 12 pack of soda in half, along the handle line, and removed the soda inside.

Then we measured and drew a horizontal line 3 inches up from the bottom on the front of each soda pack. Next, I drew diagonal lines on the sides of the pack from the top down to the horizontal line, and cut along the lines.

Once we repeated this with all the soda we had 12 stands, plenty for holding all our snacks.

I used packing tape to tape the soda packs together, taping 4 halves for each side and 2 halves for the end zones. This keeps them together, but makes them small enough to move around and fill.

Using the soda packs makes the design modular, so you could add more or less, depending on the size of the Super Bowl party you are throwing!

To make the stadium we arranged the stands around a foil tray, which forms the field. I used a 12 x 8-inch foil cake pan, but you could go larger if you are having a really huge Super Bowl party. But this arrangement holds a large amount of food, more than I expected!

I took a second foil tray the same size and cut it in half, and used each half to make the two end zones. To add color and excitement to the end zones we spread a thin layer of icing in each half tray, and my son used candy to make mosaics in each. He made a football in one end zone and a rainbow in the other. He is not super artistic, but he thinks candy art is cool and spent some time making sure his designs were recognizable!

For the football goal posts we unwrapped some chocolate candy and poked it with a wooden skewer. Then we cut a yellow straw to fit over the skewer. We took a second yellow straw and put a pipe cleaner inside it so we could bend it to a goal post shape. Finally, we stuck it on top of the skewer. 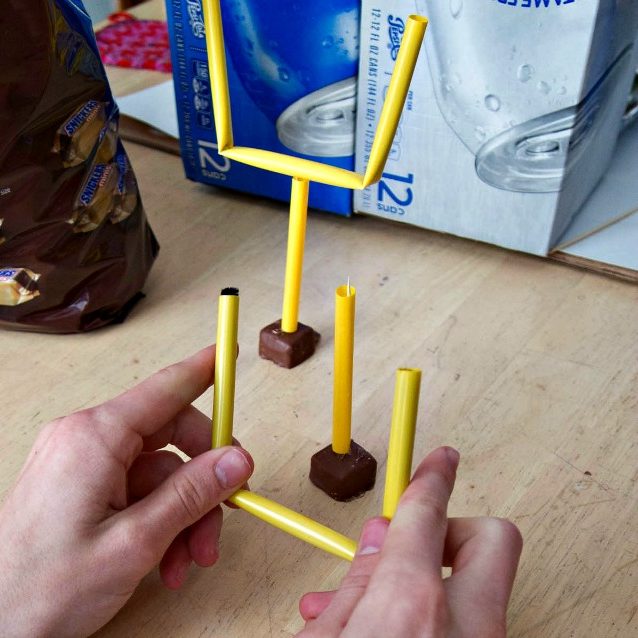 Then we added some decorative finishing touches. We cut some red and blue striped paper straws and glued them to the edges of the soda packs to make them look prettier and more finished. We also added red and blue flags and #1 finger shapes that I cut out with my Silhouette machine.

To make the field of dip we filled the foil tray with salsa and I added lines to the salsa by piping spinach dip onto it. We needed two big jars to fill the tray with salsa. Then we arranged the trays in the center of the table and filled the stands with treats!

I used a mix of snacks, like corn chips, popcorn and pretzels, along with some healthier cut veggies like carrots and celery. After the stands were full we arranged them on the sides and end of the field, and added extra details like the flags and goal posts, along with stacks of soda cans.

It came out even better than we expected! I love how easy it is to take apart and put away, and it will be easy to reuse since it is modular.

The stands made from the soda boxes are really large and fit quite a few snacks, more than I expected. I don’t think we will have to worry about running out of snacks at our Super Bowl party, even with hungry teens attending!