This shop has been compensated by Collective Bias, Inc. and its advertiser. All opinions are mine alone. #AwakenYourTastebuds #CollectiveBias

Star Wars will be in theaters in just one week. I have been a fan since I was a child, and am excited to share this newest movie with my own kids! To celebrate I used Star Wars Cinnamon Toast Crunch Cereal® to make a delicious themed Cinnamon Ice Cream Pie. 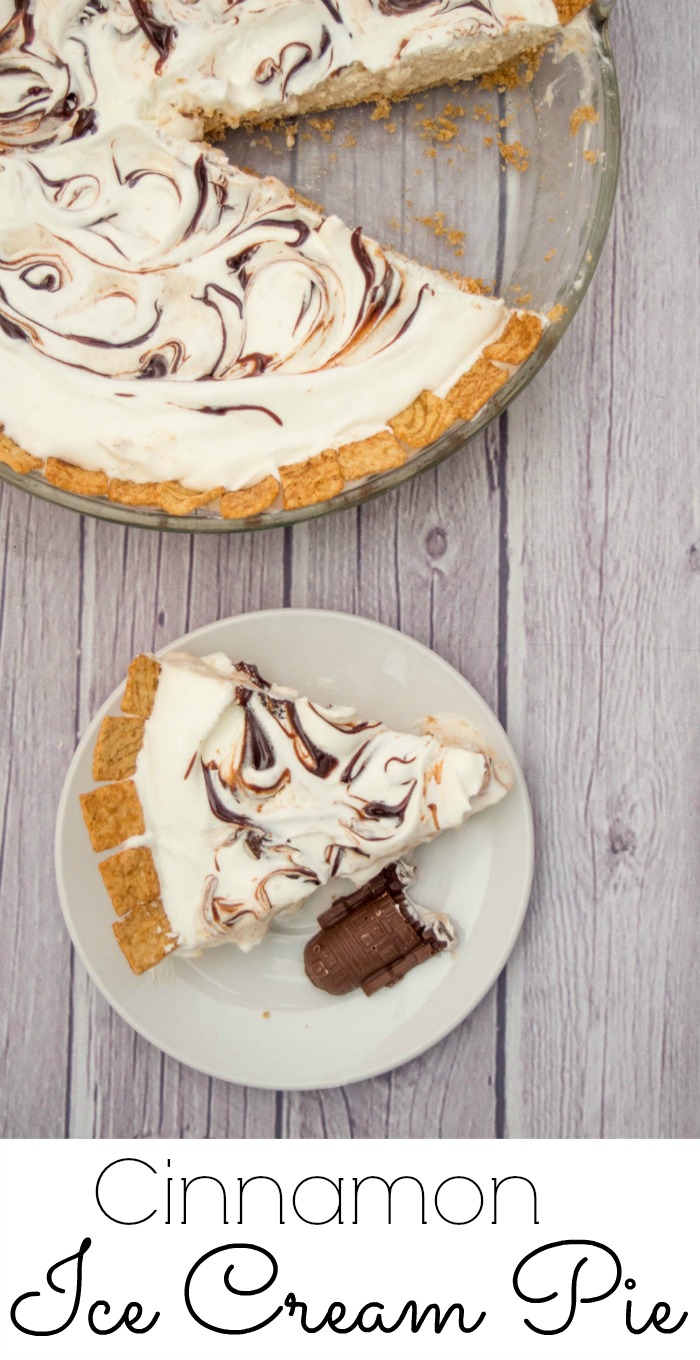 When the original Star Wars movie was released I was 12. It is hard to believe now, but my parents insisted on going to the theater and watching it first to determine if it was an acceptable movie for me, my older brother and younger sister. They were pretty protective! But they deemed it acceptable, and we went to the movies to watch it, which was a big deal in our family since we didn’t see many movies.

We all loved the movie, and were at the perfect age to be part of the fandom. I have always been kind of geeky, and wasn’t afraid to show my enthusiasm, even though it wasn’t the most socially acceptable thing for an almost teenage girl to enjoy. I am excited to be able to watch the new Star Wars : The Force Awakens with my kids next week. Over the past few months we have re-watched the entire series during family movie nights, so we are all caught up and ready for the newest installment! Last week I bought some fun Star Wars themed food for us to enjoy while we wait.

I got Star Wars Cinnamon Toast Crunch Cereal, Star Wars Honey Nut Cheerios® and Star Wars Go-Gurt®. The cereals are two of our family favorites for breakfast and for snacking, and the Go-Gurt is perfect for a quick snack on the go. Of course we had to open up the cereal boxes right away to get the cute themed Droid Viewers inside. 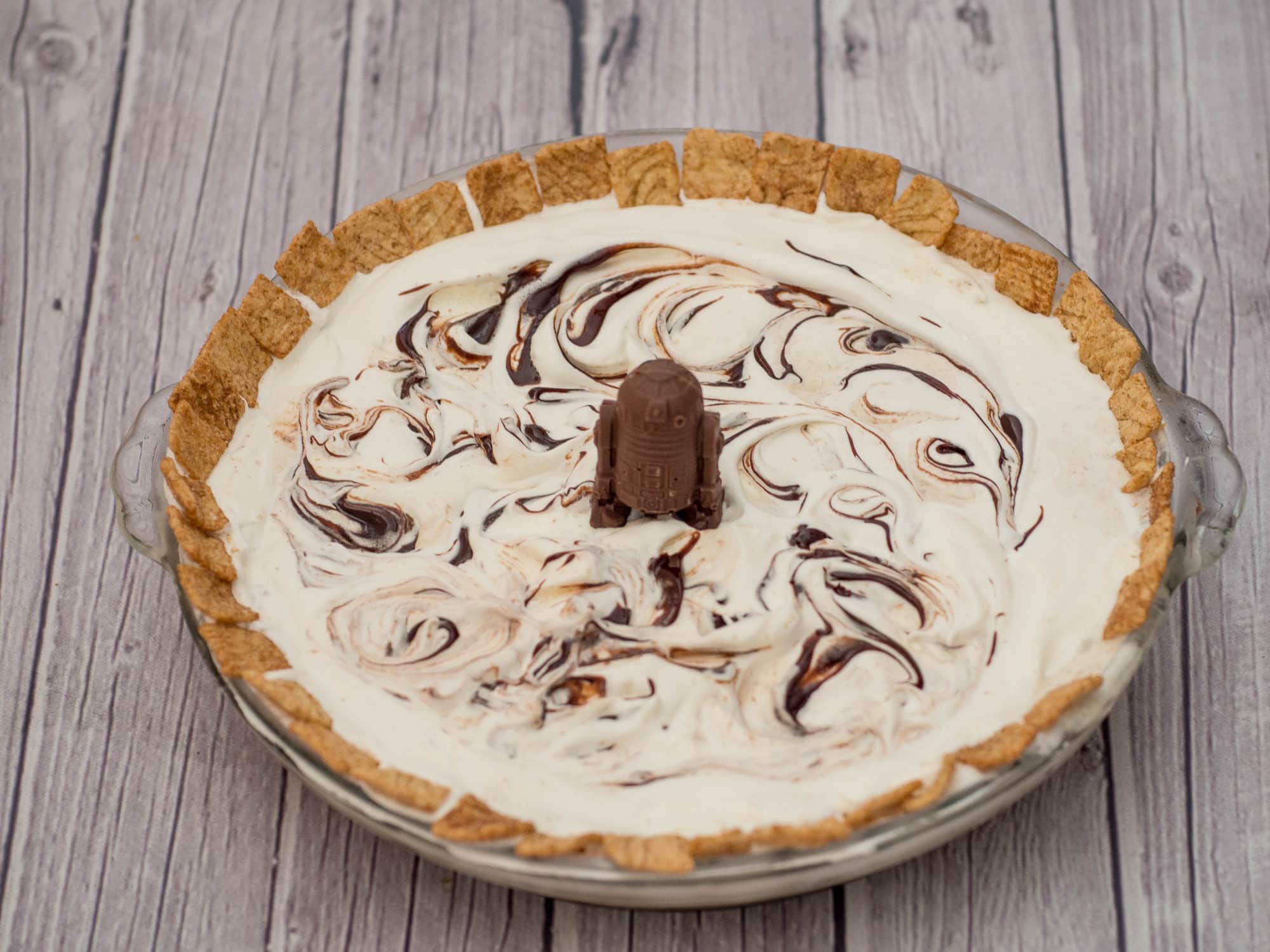 I used the Cinnamon Toast Crunch Cereal as an inspiration to make a tasty Cinnamon Ice Cream Pie. This pie is one of those desserts that looks great, but it is really simple to make. In fact it only has 5 basic ingredients. 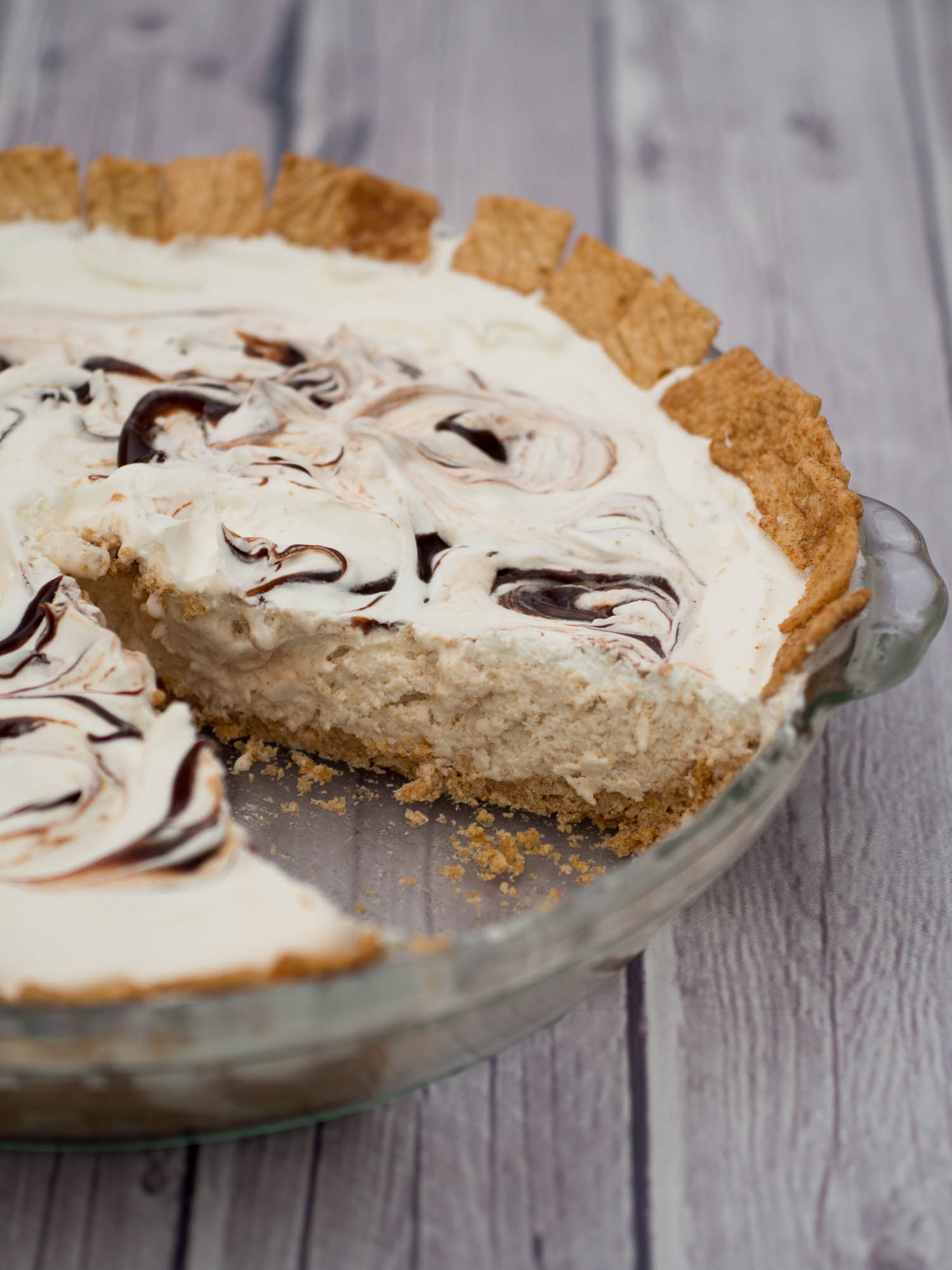 The pie is made by using crushed Cinnamon Toast Crunch Cereal as a crust, and then add a mixture of ice cream, whipped topping and cereal crumbs. The whole thing is topped off with more whipped topping and hot fudge. I swirled the hot fudge on top for a pretty pattern – kind of like a galaxy – for an out of this world dessert! 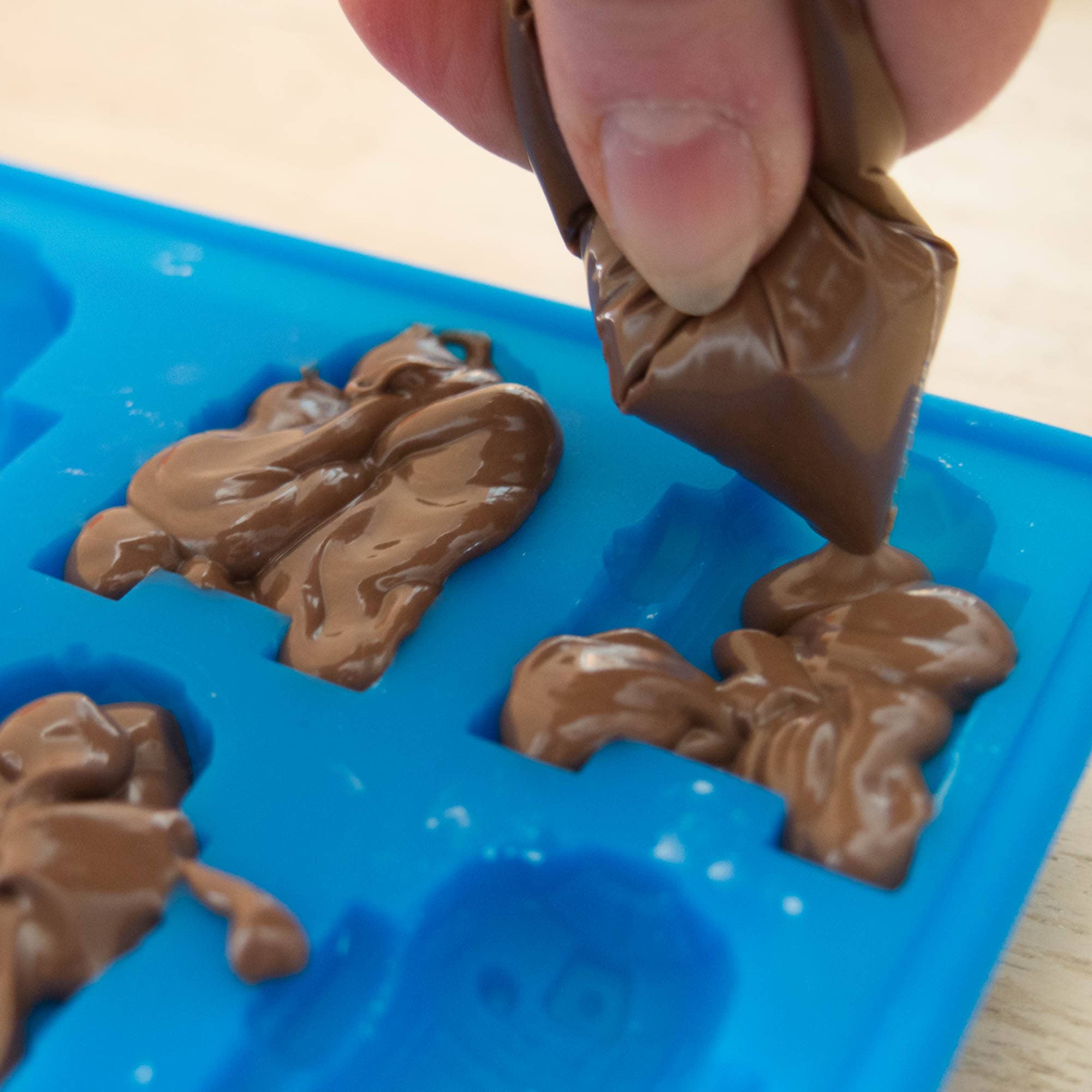 Now of course a pie like this needs a real centerpiece for a big finish. Since I am a big fan I happened to own a set of R2-D2 chocolate molds (I told you I was kind of geeky!) So I melted some chocolate and made a droid to decorate the top of the pie. The chocolate android added the perfect finishing touch! The cereal is in the crust, in the ice cream and around the edges, so the pie has a great cinnamon flavor, with just a hint of chocolate. 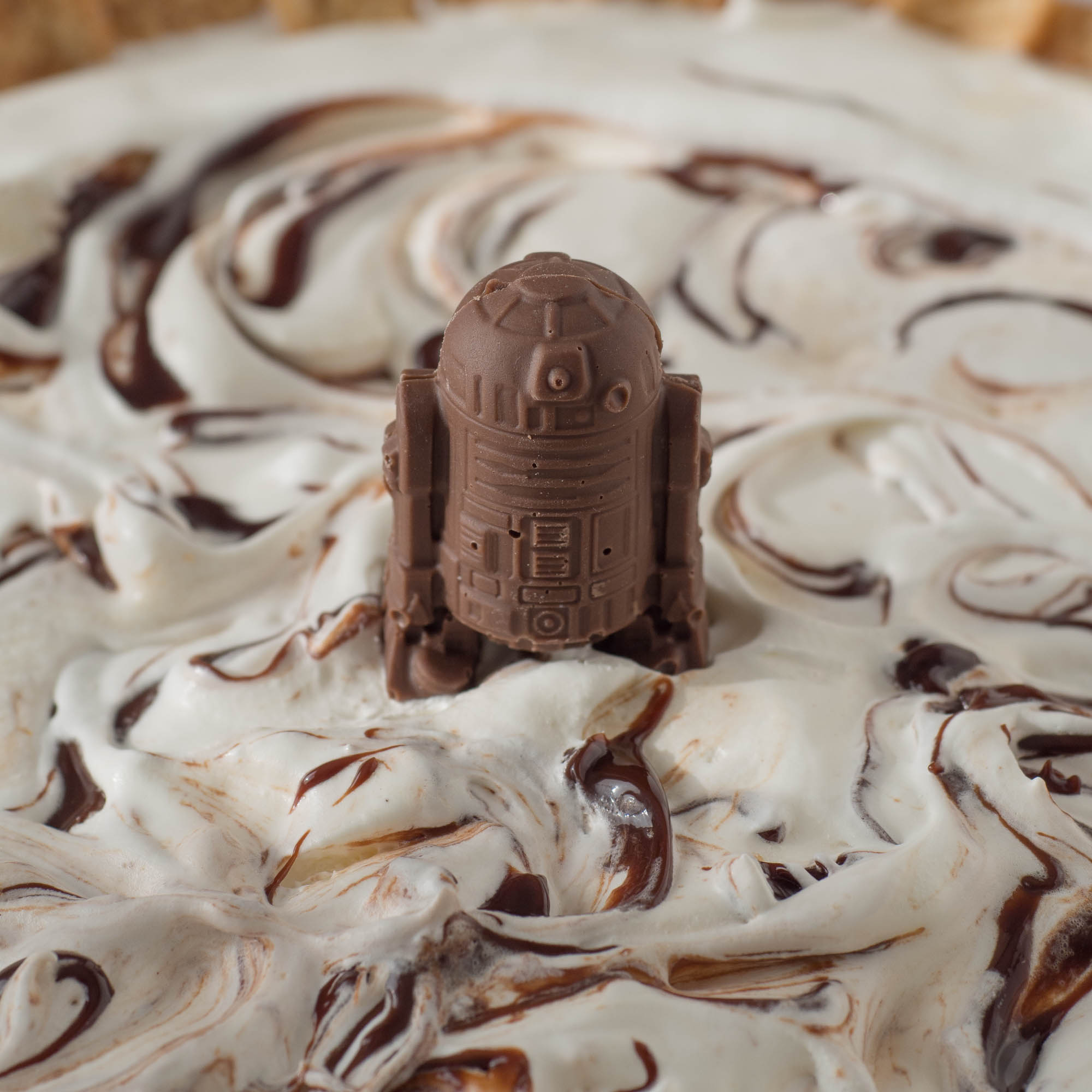 You can get these themed Star Wars cereals and yogurt at Walmart, where they are conveniently located in the cereal and dairy aisles. 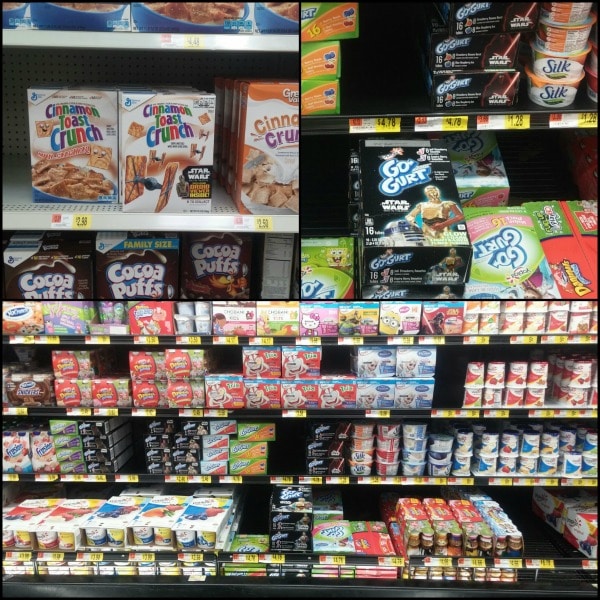 It is great to see that movies that I enjoyed as a kid are still appreciated today. Movies and pop culture a wonderful way to bring generations together. Get more idea for Star Wars Inspired Snacks – and let me know how your family is anticipating the big movie release! 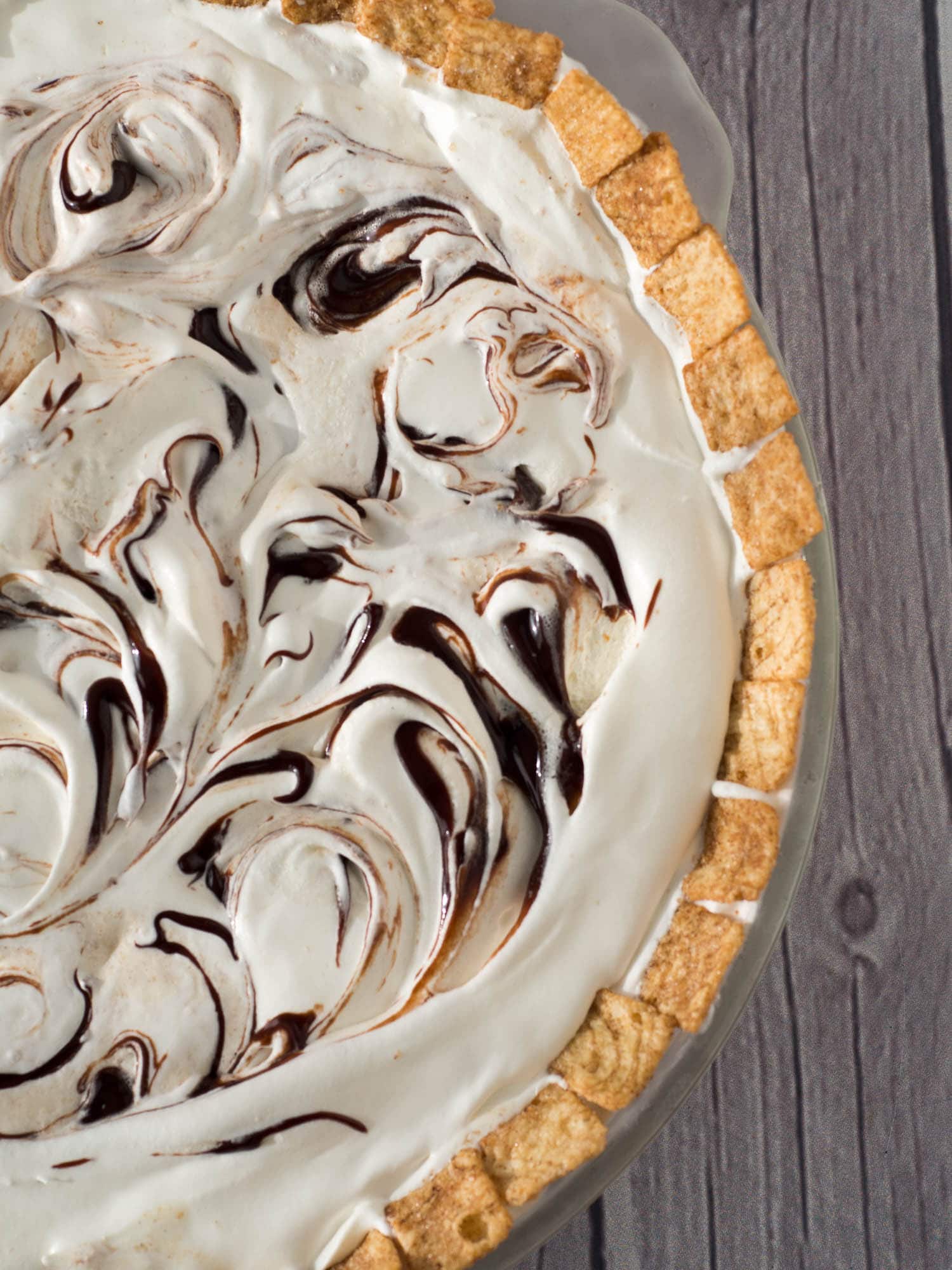