Speculoos, also known as Speculaas or Dutch Windmill Cookies, are a holiday cookie that is traditionally made for the Feast of St. Nicholas in the Netherlands, Belgium, Germany and Austria. They are a shortbread type cookie, with a lot of spices, like cinnamon, added, which makes them fragrant and tasty!

But in addition to baking traditional family recipes it is also fun to try new recipes, especially ones from different countries. Making the treats of other countries, like these speculoos, is a great way learn about other cultures. Or maybe I just like an excuse to eat more dessert!

The first time I saw speculoos cookies was at Trader Joe’s. I was intrigued and had been looking for a new kind of cinnamon cookie to make. I decided I had to learn how to make this crispy European cookie.

The cookies are thin, crunchy cookies, and are traditionally made in Europe. They are sort of like gingerbread, because of the spices, but are thin and crispy instead of soft and chewy.

The overwhelming flavor of speculoos is cinnamon and caramelized sugar, although the cookies also have nutmeg, ginger and cardamon spices. They make the house smell amazing as they bake!

These cookies are most commonly made in Belgium, the Netherlands, Germany, Luxembourg, and Austria. Originally these were made to celebrate the Feast of St. Nicholas and Christmas.

Why are These Cookies Know by so Many Different Names?

So what about the name Dutch windmill cookies? That seems to be mostly a U.S. thing. Some of the most popular commercial bakers of the cookies bake them in the shape of a windmill, leading to them being called windmill cookies.

Are Speculoos and Biscoff the Same?

Yes, biscoff is yet another name for the same cookie. Speculoos is the generic name of the cookie and Biscoff is a brand name from the largest company in Europe that makes and sells the cookies commercially. Confused yet?

How are Speculoos Shaped?

Speculoos are traditionally not made with a cookie cutter, they are made with a mold or a stamp. Ideally you want something that is going to leave a an imprint on the surface of the biscuit. I have a snowflake cookie stamp that I rarely use, and speculoos was a perfect cookie for using it. 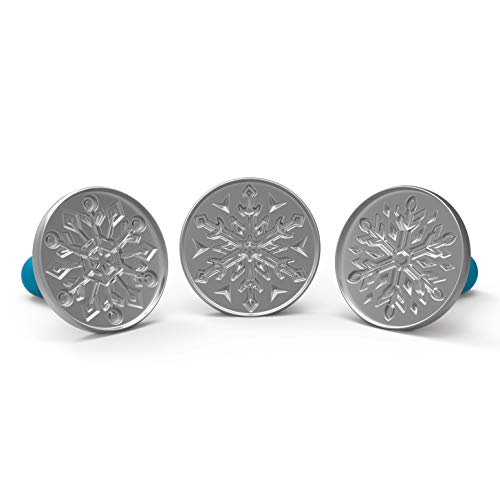 This summer I found a springerle rolling pin while cleaning my mother-in-laws basement. I believe it came from my husband’s grandmother, who was German. I can’t wait to try it out this holiday season!

What if You Don’t Have Cookie Stamp or Springerle Rolling Pin?

Luckily there are alternatives if you don’t want to go out and buy a cookie stamp or springerle rolling pin just for this recipe. You can choose to ignore tradition and roll out the dough and cut it with cookie cutters.

Or you could roll them into balls and squish them with a drinking glass. Neither of these options will be as quite as pretty as traditional speculoos, but they will taste just as good.

How to Make Speculoos

1. Cream the Butter and Sugar

2. Mix in the Egg and Vanilla

Then mix in the egg and vanilla and let the mixer run for a couple minutes.

3. Add the Flour and Spices

In a small bowl combine the baking soda, salt, cinnamon, nutmeg, ginger, cardamon and flour and mix. Then stir the flour mixture into the mixer bowl and combine. At this point you want to mix the dough as little as possible. Make sure all the flour is mixed in, but don’t over mix.

Refrigerate the dough for at least an hour. Chilling the dough makes it easier to handle and also helps keep it from rising or spreading. If the dough was to rise or spread the stamped design would be lost.

To use the cookie stamp I rolled the dough into small balls and then squished each one with the cookie stamp on a lightly floured table. Then I used a knife to transfer the round cookie to cookie sheets covered in parchment paper.

I found that I needed to dip the cookie stamp in flour after every stamp. The flour got into every nook of the stamp, but there wasn’t a lot transferred to the surface of the cookie.

I haven’t tried using the springerle rolling pin yet. But I feel confident that using lots of flour on the rolling pin and table will be necessary, just as with the cookie stamps.

No matter how you shape the cookies you want the final cookie to be about 1/4 inch thick. These cookies are supposed to be thin and crispy.

Once the cookie sheet is full sprinkle the top of the cookies with extra cinnamon sugar, just to add more sparkle and spice to the cookie. The cookies bake at 375 F for about 11 minutes.

These cookies were delicious, and the whole house smelled amazing while they baked, thanks to the cinnamon, nutmeg, ginger and cardamon.

These crispy cinnamon cookies are excellent for dunking into hot coffee or tea. They were also pretty addictive to eat, so I ended up having my daughter take the speculoos back to her apartment, so I would stop eating them!

Did you make this recipe?

I'm Anne, a homeschooling New York mom of three. I love to cook, craft and write! Click here to learn more about me and working with my blog.