This recipe for Gluten Free Apple Crisp with cranberries combines apples and cranberries with a pecan and oatmeal topping for a tasty skillet dessert that is both gluten free and vegan.

Apples and cranberries are two of the best tastes of the fall season, and they are combined in this homemade Gluten Free Apple Crisp recipe that is made in a cast iron skillet. 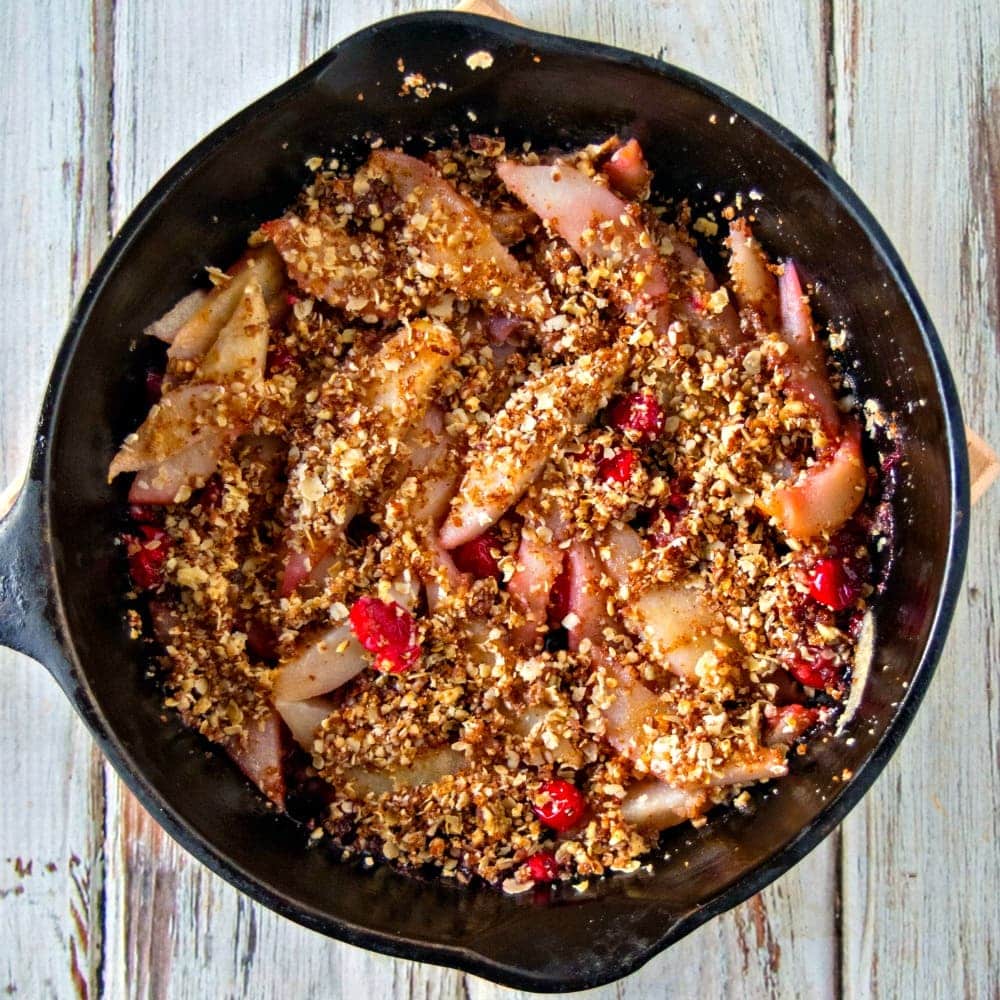 My mom recently gave me her cast iron skillets, because she finds them too heavy now that she is in her 80s. So I have been experimenting with cooking in cast iron, and it is perfect for dishes that go from the stove top to the oven. 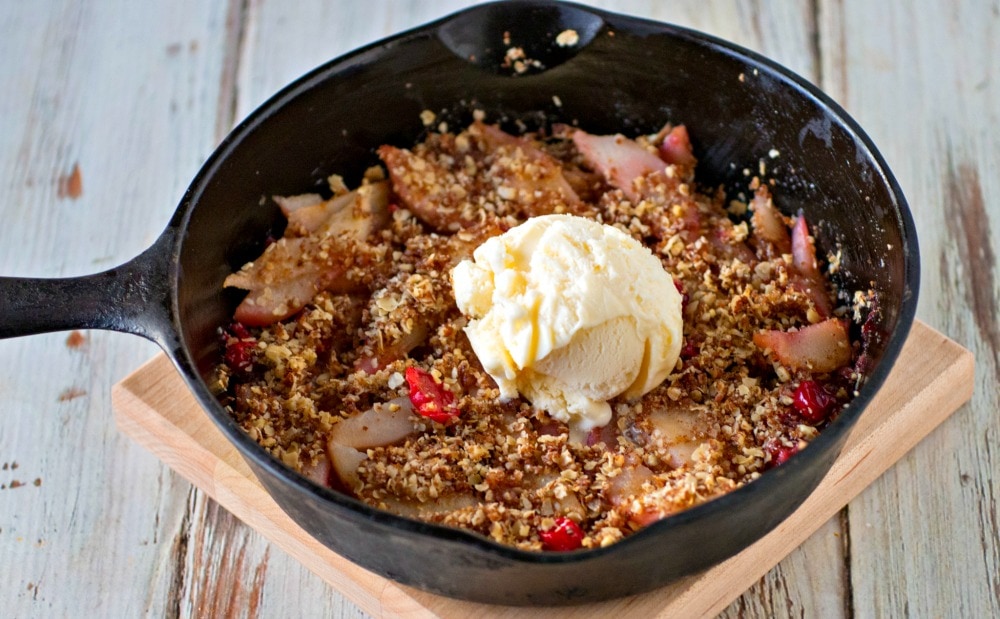 Many 0f my friends and family are trying to reduce or eliminate the amount of gluten in their diet. This can make it a challenge to come up with a dessert that can be enjoyed by everyone! Apple crisp topping typically contains oatmeal, sugar and flour. To make this recipe gluten free I replaced the flour with chopped pecans. As long as your oats are gluten free this is an easy change to make the apple crisp gluten free. The pecans add a nutty flavor to the dessert that enhances the flavor and makes the topping extra crunchy.

My recipe uses coconut oil instead of butter, which makes it dairy free and vegan. My teenage son has a dairy intolerance which makes it difficult for him to enjoy desserts. Especially during the holidays so many of our favorite recipes have lots and lots of dairy! This quick and easy dessert makes a great ending to a family meal that we can all enjoy. This dairy free and gluten free apple crisp recipe is perfect for a family like mine that has multiple food restrictions. 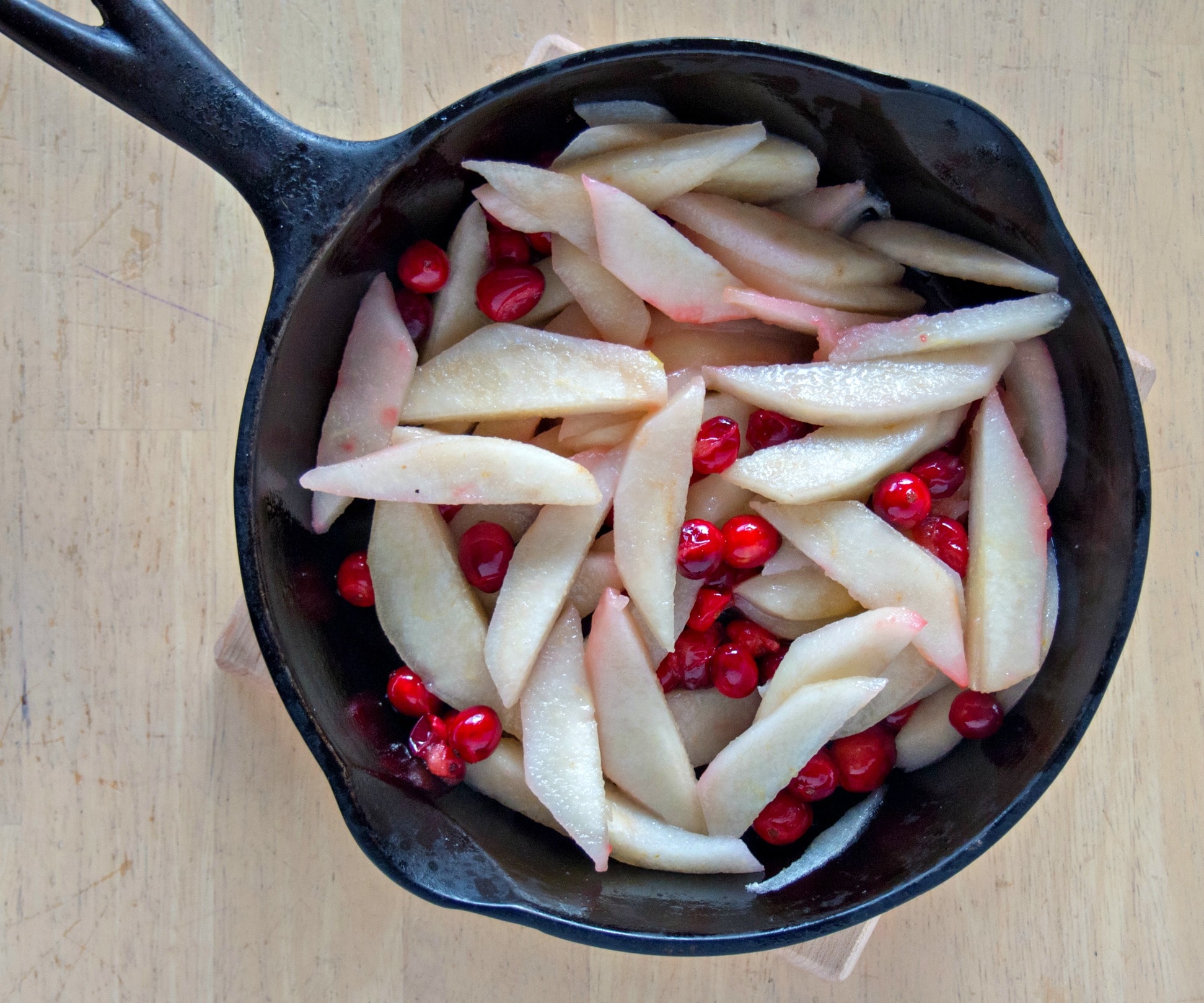 I added cranberries to this recipe on a whim, mainly because I love the tart taste of cranberries. The cranberries make it perfect for the fall or the holidays, and they add a nice burst of tartness that offsets the sweet apples. 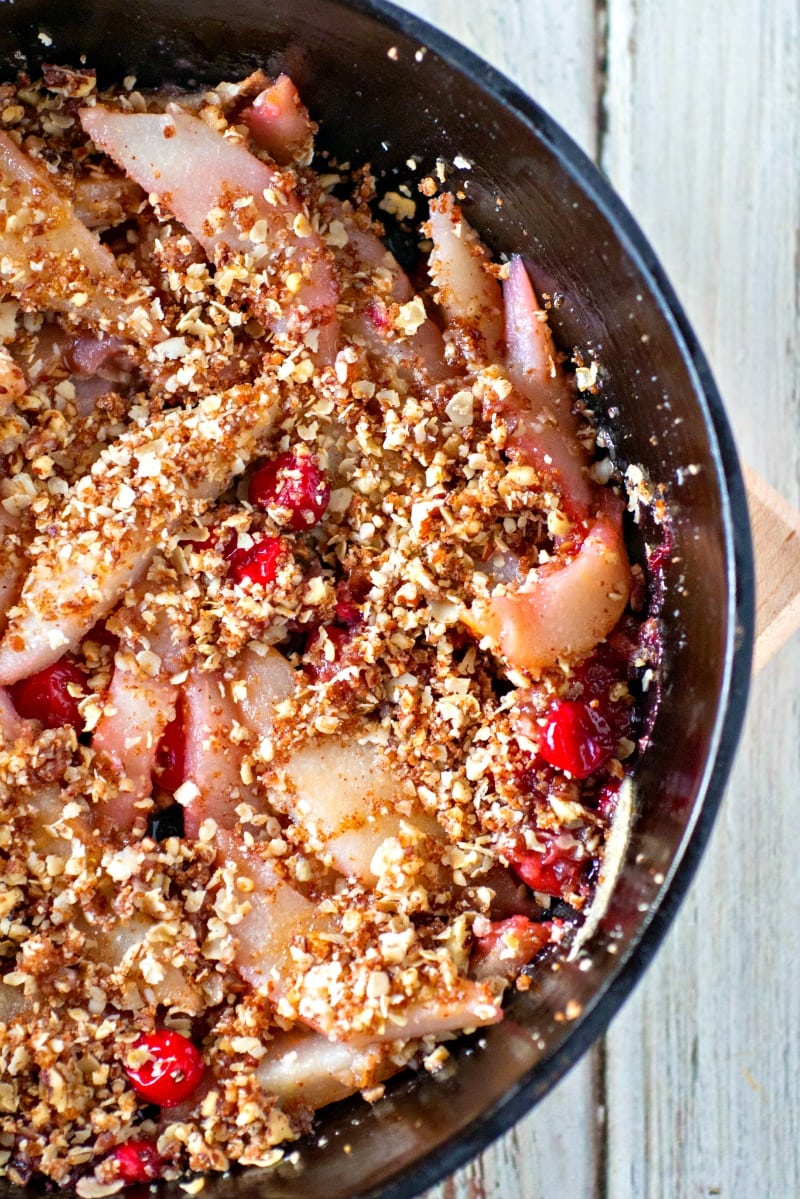 To make the crisp I sauteed the apples and cranberries in the cast iron skillet on the stove for about 10 minutes to soften them. Once the apples start to lightly brown and the cranberries start to pop it is time to add the oatmeal topping. I used my food processor to mix the pecans and oatmeal with the oil and spices. The topping should be crumbly and coarse, but not as finely processed as breadcrumbs. Once the fruit is topped off it is baked in the oven until the topping is crispy and lightly brown. 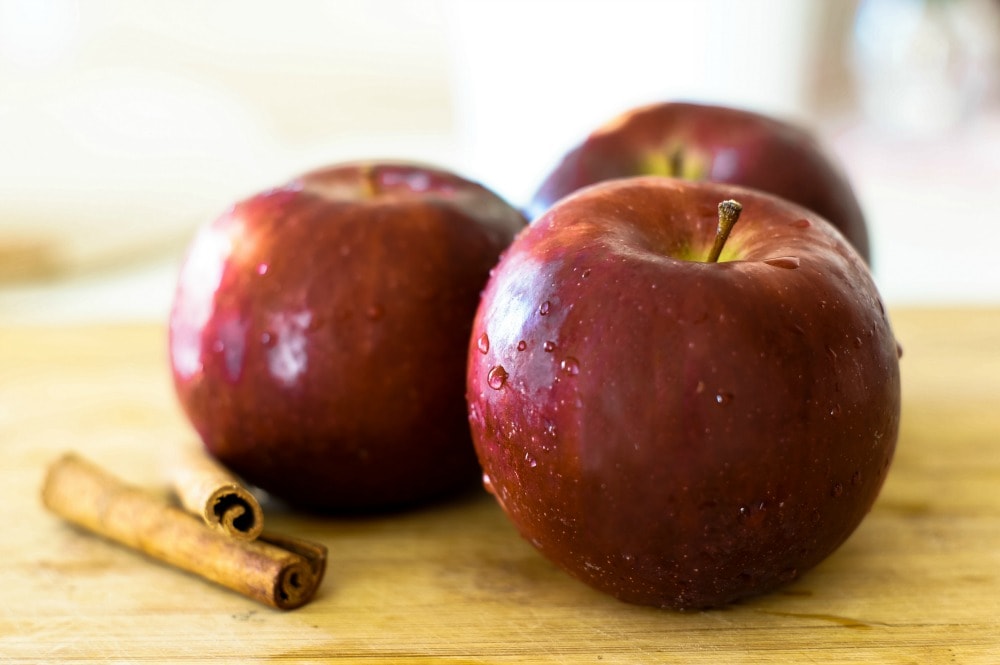 One of the best things about Apple Crisp is that the type of apple doesn’t matter much. Crisp apples like Granny Smith or Honey Crisp work well, but you can make it with any kind of apple, even soft ones like Fuji or Cortland. Since the dessert doesn’t have a pie crust on the bottom it doesn’t matter if the apple filling is a little more moist and mushy. I usually make Apple Crisp with whatever apples I have leftover in the refrigerator. It is also nice to make it with a couple different types of apples to add variety to the dessert. 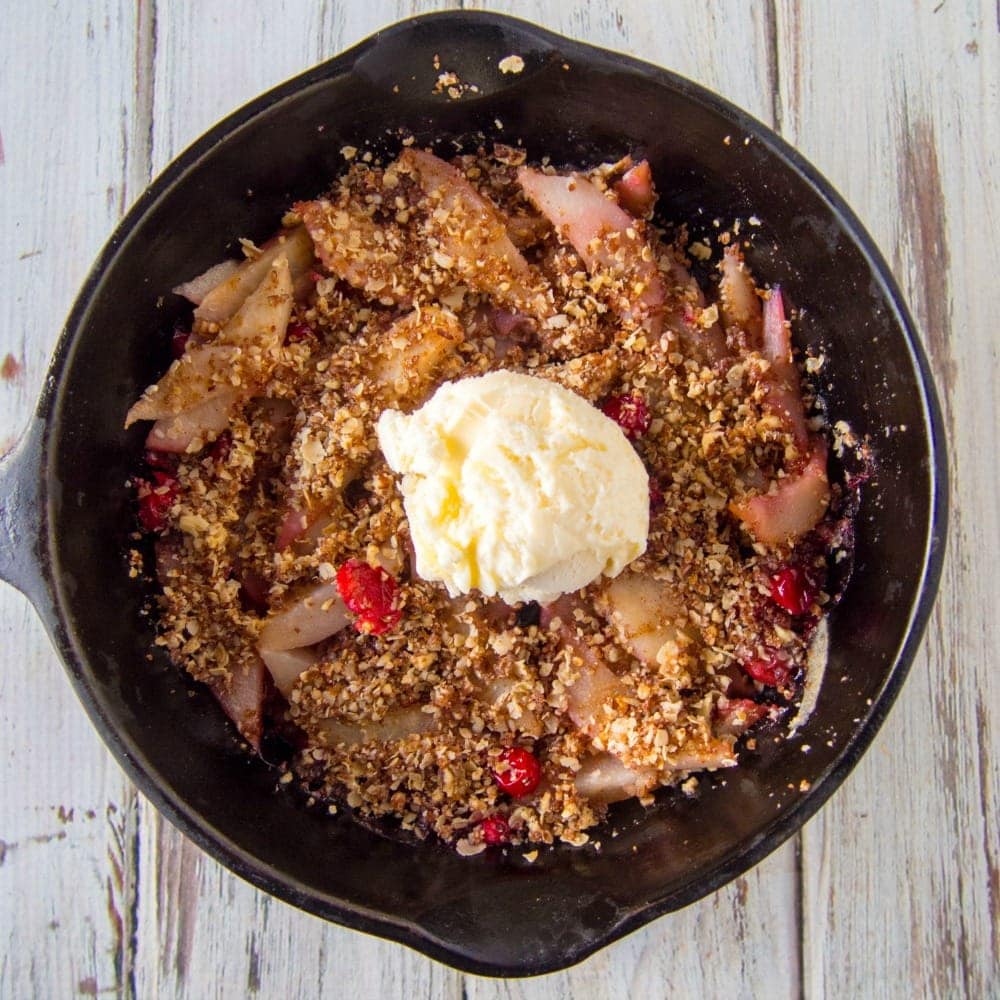 What is the Difference Between an Apple Crisp, Crumble or Cobbler?

Apple Crisp and Apple Crumble are basically the same dessert. The main difference is that in America we usually call it Apple Crisp and in England it is more commonly called Apple Crumble. But both are desserts that combine baked apples with a crispy streusel topping usually made from some combination of oats, sugar and flour. Apple Cobbler is different because in a cobbler has a biscuit topping. A cobbler is more difficult to make gluten free, but it you are craving warm Apple Cobbler check out my recipe for that dessert here –> Easy Apple Cobbler Recipe 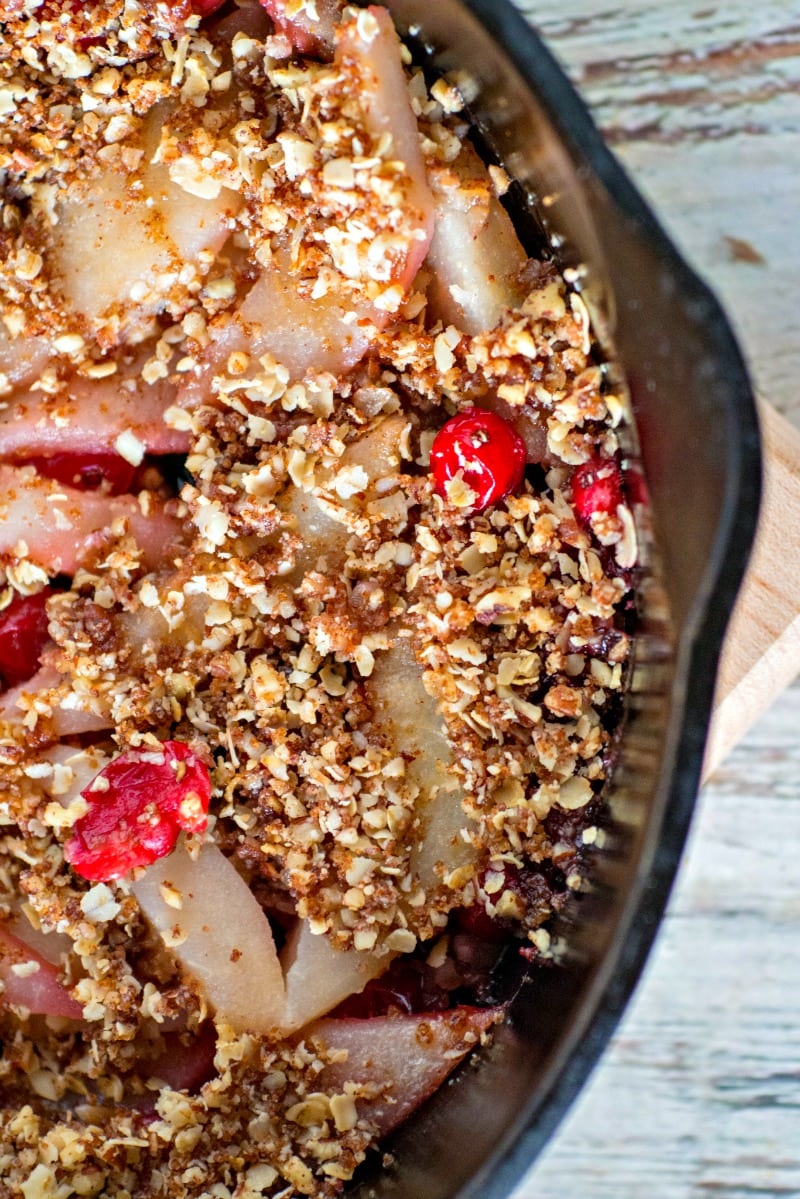 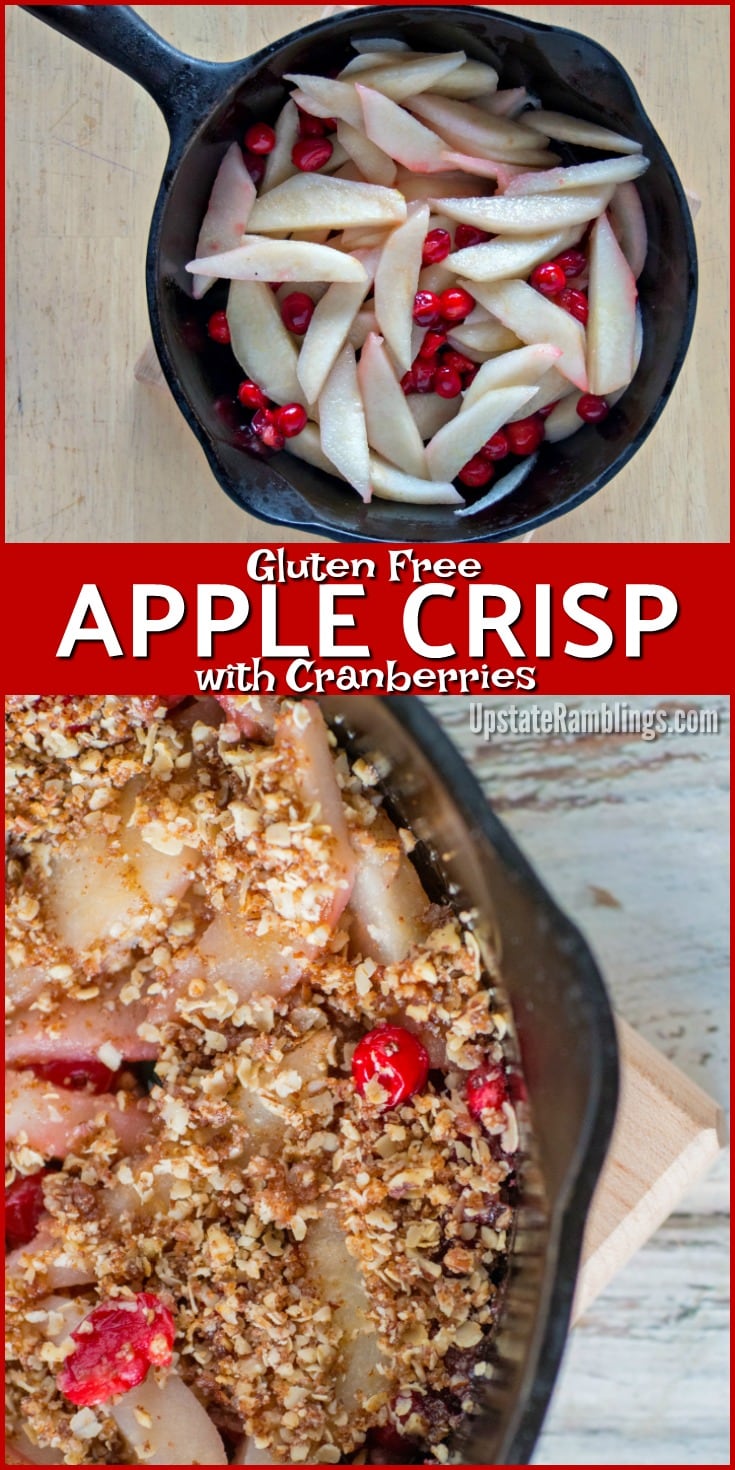